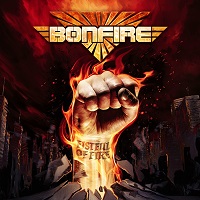 It’s hard to believe that German rockers Bonfire have been lighting a flame (sic) under the melodic metal scene for almost 35 years now. Perhaps part of the reason for this disbelief may that they have been flirting on the edge of the scene for much of that period, not quite achieving them same level of success as some of the their contemporaries (and countrymen such as Helloween), but instead ploughed a slow and steady furrow that has led them to the release of this, their 16th studio album and the third with vocalist Alexx Stahl.

Now, I’ll show my age and admit that I first came across Bonfire back in their first wave of success, and still have a few of their 12” singles buried away on the shelves in my mancave. But, like many bands from that era, they strayed out of my peripheral vision, only recently coming back on to my radar thanks to festivals such as Hard Rock Hell, at which both they and I were regular attendees for a few years. But, they didn’t quite enough to ignite my youthful inner flame and go running out to invest my heard earned dosh in either their then-current releases or their extensive back catalogue.

And, to be equally honest, ‘Fistful Of Fire’ hasn’t really done that much to change my mind. Yes, it is a solid melodic rock album, a very solid one in fact. It is packed to the brim with all of the classic elements: searing solos, massive melodies, heroic harmonies, rock solid rhythms and a stunning vocal performance from Stahl, who once again proves why he arguably has been almost singlehandedly responsible for the band’s renaissance in recent years.

Lead single ‘Rock ‘n’ Roll Survivors’ basically summarizes this album. It is the sound of a band who have stuck at it, through thick and thin, through trial and tribulation, through the good times and the band, to continue doing what they love – and that is playing high quality melodic rock with enough of a metal edge to bring out the inner headbanger but also to simultaneously get your feet tapping and your missus reaching for thon there hairbrush… The result is, as I said, a good, solid hard rock album. The sort of album we need to brighten these dark days of imposed isolation. It won’t exactly set the world on fire (sic), but it will warm the cockles of your blackened rock ‘n’ roll heart for a wee while.