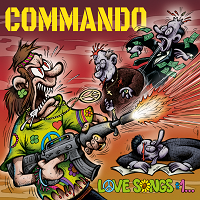 When thrash metal goes wrong it’s incredibly disappointing and that’s exactly what’s happened with the debut full-length from Commando. Hailing from the crossover end of the thrash spectrum, their songs are short and bratty bursts of energy, the majority of which are under two minutes long and the entire 16-track album wraps up in a neat half an hour. It’s full of juvenile humour and fast riffs, but it’s also totally forgettable and has little to recommend. The emphasis is firmly on fun but unlike similar bands, it was probably a lot more entertaining to record than listening to it is.

Now we should make clear that this is not Commando, the Swedish band and nor is it Commando, the cult thrashers from Mexico. This is a brand-new act spearheaded by Rui Vieira and José Alexandre Graça, two veterans of the Portuguese metal scene and sadly, it’s a lacklustre start. Tracks like ‘Metal Is The Lei’ and ‘Mosphitas’ are one-dimensional blasts of aggression but they lack any real hooks or choruses. They’re forgettable and derivative and far too often come across like Municipal Waste off-cuts that were recorded in a different language.

And herein lies the twist; the language-barrier is their biggest obstacle. We’ve nothing against acts recording in their native tongue but the sad truth is that unless you speak Portuguese, you’re unlikely to get much out of ‘Love Songs #1…’ They could be exceptional lyricists and listeners in Brazil may find this album absolutely hilarious, but the joke is lost on us uneducated mono-linguists and the songs aren’t strong enough to survive without it.

As we can’t understand the subject matter then the album lives and dies on the musical quality alone but Commando come up lacking. Their riffs have been heard a thousand times before and if you want raucous little bursts of noise, it’s hard to imagine picking this over anything in D.R.I or Insanity Alert’s back catalogue.

So, while it probably is a little unfair, we can’t recommend Commando unless you’re already a dedicated thrasher with a reasonable grasp of Portuguese. The only English track is about dental hygiene and isn’t funny, so bar the gimmicky Slayer tribute, there’s nothing here to make you want to listen to it again. They probably had a right laugh recording it and it might even be a big joke that isn’t meant to be taken seriously but we’re clearly not the target audience. It’s possible that this is a brilliantly insightful and highly entertaining comedy-thrasher, however the fart noises would suggest otherwise.