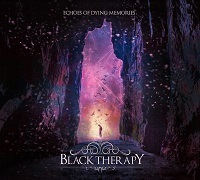 As the continent which birthed melodic death metal, it’s not entirely surprising that Europe has spawned a mass majority of the bands within the genre. But, some 20-odd years on from its initial inception many of melodeath’s godfather bands have either shifted their songwriting to closer resemble the boom of metalcore or shifted enough that the melodic sides now far outweigh the death in the equation. Enter Italy’s Black Therapy – a band whose sound stands proudly within the traditions of grandiose melodic death metal records of old without dispensing any of the genre’s hallmarks.

You’ll find plenty of stunning, epic guitar melodies, snarling vocals and powerful blast-beats on ‘Echoes of Dying Memories’, the record burning bright with the Gothenburg Sound. Indeed, these Italians really know their way around the best parts of melodeath, capturing the original spirit far more accurately than anything produced by the likes of Soilwork or In Flames as of late. Opener ‘Phoenix Rising’ is about as grand and epic as melodeath comes, its expansive 6-minute run-time put to full use in showcasing just what the band can – and will – do. The entire thing sounds enormous, each instrument a wail of excitement that signals pure, unabashed joy in the overall composition.

In a genre which has struggled to balance its two extremes, Black Therapy craft a record which strikes the perfect symbiosis, offering up epic heaviness and soaring melodies alike. At the heart of it all is a sense of melancholy which sees the band wander into doom/death territories at times, the forlorn guitar lines of a song like the album’s title track evoking a very tangible sense of longing and sadness. In turn, this also means that the heavier and lighter elements shine out more as the tug-o-war progresses, a realm of extremes which are explored across the record’s run-time.

Considering the over-indulgent length of many modern releases, it’s amazing that ‘Echoes of Dying Memories’ barely breaks the 45-minute mark. For a record which constantly feels like it transcends and goes as big as possible, each of the songs is concise enough to know just when to cut away and burst into crescendo, meaning the record feels much bigger and longer than it actually is. In fact, ‘Dreaming’, one of the record’s most ambitious songs, doesn’t even hit the four-minute mark, evoking the idea of a symphonic metal epic whilst being shorter than your average thrash track and containing little more than keyboards/synth to add sub-symphonic elements.

‘Echoes of Dying Memories’ is definitely a record more for melodeath fanatics and purists than for those who are looking to potentially dip a toe. For all of its flair and indomitable execution, this is a record which owes more to melodeath’s formative moments than its breakout successes, and as such massive singles and festival favourites are few and far between. Instead, what we get are stunning metallic epics which appeal to the metal purist crowd through sheer vitality. On their third full-length, Black Therapy aren’t trying to reinvent the wheel, nor necessarily breathe new life into the melodeath genre. Instead, they champion everything that was great about it in the first place, crafting a loving temple built upon excellent melodies and brutal blasts of ferocious noise.