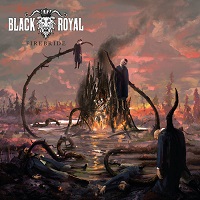 This one is a bit difficult for me to review. There are aspects that I really like and many that I find wanting. Most of my issues are thematic and have less to do with the technical skill or performance but I will get into what I was less than enthusiastic about in the second half of the review. First, it is only fair that I go over the things I did like. Starting with the music.

The promotional information I was sent brands the band as sludge metal. They also mention some black metal blended into the track ‘Pagan Saviour’. I think this is selling the band a little short.

I would say there are elements of black metal through the album as well as a little melodic metal giving the album a wide range of style. This does a great job of showing off the band’s capabilities and makes for an album that has some nice variety to it while still feeling like each track belongs together.

Vocally, there is little to complain about either. The aggressive vocals are perfectly suited for the musical style. It is angry and puts a chill in your spine as it should. Also, in the track ‘For The Dead Travel Fast’ there is a nice contrast against a clean female that was rather nice. In ‘Coven’ there was also a similar contrast against a clean male vocal and a violin. There are not the only times that the vocals evolve in this album either just the most notable times to me. The band does a great job playing with some unique styles giving the album a few extra layers without ever losing their own style.

So, I said at the beginning that I had some issues thematically with the album. My main issue is that it felt cheesy. It is like a kid in the ‘90s heard from their mom that metal was all devil worship and she did not like it so the kid started a metal band just to piss her off. The whole prayers to Lucifer thing in many of the tracks just feel like they are there because someone said they are supposed to be in metal and therefore have this cheesy, trying too hard to fit in feel to them. I found myself more than once thinking “Okay I got it, you don’t like Christians and you do like Lucifer and witches. We have heard this all before. Let’s move on now.” It just seems like they are stuck in the rebellious stage ff their teenage years. because of this, I don’t think the lyrics ever really found their footing rather they seemed like a parody of what people who don’t listen to meal think the lyrics should be.

While there is a lot to like about this album, I found the lyrics with their over-dependence on demonic themes to be too much of a deal-breaker for me. It just got boring really fast and that is a shame because there was so much potential in the musical and vocal styles shown in the album that it could have been great. I just had a really hard time taking it seriously with the lyrical content and because of that I personally would give it a miss.