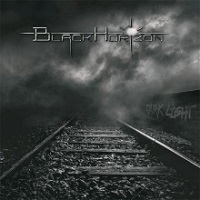 Good old, simple heavy metal… It’s a genre that many are able to perform, but one that is not so easy to excel at. French metallers Black Horizon have been on the scene for two decades now, so you might expect that these guys have mastered the art of nailing this genre… Let’s find out with their latest release – ‘Dark Light’.

‘Dark Light’ is the fifth outing from the Parisians after a hefty nine year quiet spell since their last release, ‘The Choice’, and the first thing that stands out to me is that there has clearly been a lot of learning about mixing and producing going on behind the scenes. This album is significantly more polished than their previous release, particularly when it comes down to mixing the drum tracks!

Now, as for the general feel of the album, I come back to my opening statement. Does this have what it takes to excel in the Heavy Metal genre? It is clear that this album has been heavily influenced by the likes of Judas Priest and Iron Maiden, with former Maiden singer Blaze Bayley (Wolfsbane) even making a guest appearance on this album (Although I’m not 100% sure where!). Taking influence from these titans is obviously a great place to start, but to really excel in the modern heavy metal scene, you have to take this and try and work it into something fresh and exciting. I’m not sure that this has shone through on this album BUT that’s not to say that this isn’t a good album! Overall, I would say it’s a solid album, but it just doesn’t quite make it into my top albums of the year to date.

It does do a lot of things right though…

Alex Puiseau’s vocals stand out very well, particularly for someone who is not singing in their native language. In fact, if I hadn’t been told that Black Horizon were French, I would not have guessed it! His vocal prowess is really showcased in the album closing track ‘Miles Away’. This track is a complete deviation from the feel of the rest of the album and opens with a piano solo before throwing in some cello for good measure. It develops into a strong metal ballad that I definitely enjoyed, in fact it may be my favourite on this album. And it must be their favourite too as it’s immediately followed by an acoustic cover of the same song. Perhaps not the finest example of track ordering.

The preceding tracks are all good, solid, classic heavy metal and are exactly what you would expect from the genre. There are a few surprises thrown in too, like at the 3:40 mark of ‘Howling Like a Wolf’ there’s a brief guitar cover of a recognisable piece of music that I can’t, for the life of me, remember the name of! Answers on a postcard for that one please…

Then you have ‘Walking Close to Me’ which has a generous helping of those classic Iron Maiden ‘Woah-ohs’. I believe it is this track also heralds the guest talent of Blaze Bayley, which would make these even more appropriate!

As you can expect, the guitar solo work throughout ‘Dark Light’ is frequent and powerful. Seb Crispino really does know how to shred! Particularly stand out are his solos on ‘Freedom’ and ‘Obsession’ but let’s not overlook the rhythm section! Dom and Phillip (bass and drums respectively) really form the powerhouse behind each of the tracks on this album!

Overall, this is a decent album and a marked improvement on their previous release with some great production. If you know exactly what you’re looking for, and that is some reliable heavy metal, then this album is definitely for you! To me it seems that Black Horizon have broken their dry spell on an upward trajectory, so who knows what the future could bring!?