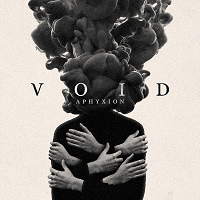 Danish five-piece Aphyxion have come back with their third album ‘Void’. The new release represents 11 tracks of the bands brand of melodic death metal. Since their formation in 2007, the band have earned wide spread critical acclaim and a large fan base. 2014 saw the debut album ‘Earth Entangled’ then follow up ‘Aftermath’ in 2016. Their rise in popularity has seen them support the likes of Metallica and become the youngest band to play Wacken Open Air. With hefty praise already earned and earmarked as saviours of melodic death metal, there is certainly pressure on for them to deliver. Aphyxion are being watched closely, will ‘Void’ be the album to send them even higher?

‘Fork Tongued’ represents the second single from the album and as an album opener it’s a strong statement. With a full band punch the album kicks off. Crunching guitar riffs are coupled with a pounding, aggressive rhythm. The full throttle attack of the verse sections opens into an expansive melody driven chorus that lends the music an anthemic quality. There’s not a moment wasted within the flow of the music. The dynamics shift slightly to allow for the structure to move between its phases and the breakdown, complete with hand claps, lends itself perfectly to a live environment before launching back into the catchy, heavy chorus.  A guitar-based melody drives the introduction ‘Sleepwalkers’. The initial hook pulls the listener in before the music breaks into a punishing groove. Once again, the division between verse and chorus is led by the melody. Cleaner vocals take charge in the chorus sections and with a reverb wash, are given an expansive shine in order to layer excellently on top of the driving wall of sound.

In the opening two tracks Aphyxion are proving themselves worthy of the praise that they have received thus far. They have clearly worked to harness the style they want to deliver and through strong musicianship and song writing they produce the goods. They don’t look to deviate too much from the melodic death metal sound that they have established. Rather they are looking to improve on what has gone before and produce tracks that are capable of lifting them into a bigger spotlight and put them on course for bigger venues and headline slots. Tracks like ‘Crown of Thorns’, ‘A Gap of Sky’ and ‘No Man Is an Island’ display a maturity to the song writing. Coupling together a punishing aggression to the rhythms with well crafted melody and lead lines creates a captivating musical wall of sound. The vocals that round out the texture are delivered in a crowd friendly way with chorus lines allowing for a sing along and further enhancing the anthemic sound.

There’s a weighty power to their music too. Tracks like ‘Happily Apathetic’, ‘Pain’ and the title track feature some of the more crushing vocals and rhythms found on the album. ‘Pain’ uses a dynamic shift in the instrumentation to push the aggressive vocals to the fore all the while a layered undercurrent builds to the eventual closing crescendo. ‘Void’ closes out the album and offers pounding drum and bass lines with colossal sounding guitars all grouped together with the throat tearing vocals. It’s a tidy way to tie up all of the musical and stylistic elements that have been present throughout the previous tracks and provide a powerful closer.

Some may look to criticise what is on offer with ‘Void’ claiming that the production is to slick and that the music produced has a mass market appeal that removes the soul. While it is undeniable that the production on the album is excellent, every instrument is clearly heard and the well-placed effects have the desired outcome of adding to the music rather than overpowering. The music itself would still work without the production values in place. It’s not over produced it is only supported by the mix and mastering techniques used.  Similarly, yes there is a mass market appeal to the music that Aphyxion have created. Big riffs, pounding rhythms and melodic vocals are a very popular blend. The difference here is that Aphyxion nail the creation and delivery. The listener gets the impression that the band have worked hard for a while to achieve the sound that they deliver. It’s not a case that they have tapped into the current trend and followed a paint by numbers formula. They’ve stayed true to their earlier releases and developed from there.

With recent reports and figures suggesting that Heavy Metal is alive and well in terms of widespread popularity, labelling a band with the title of ‘Saviour’ might be a little unnecessary. However, what Aphyxion are showing with the quality of their output in ‘Void’ is that they are sure to be key contributors to the genre for some time to come. With the strength of this album one can expect to see them moving up the run times of major metal festivals and drawing in a greater fan base.