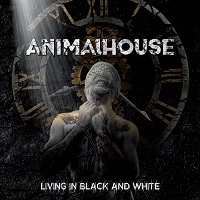 I know they always say that you shouldn’t judge a book by its cover, and I guess the same can be said for bands – you shouldn’t judge them by their name. But on this occasion, I just couldn’t help myself when I came across Italian power metallers Animal House. Immediately all I could think of was Bluto and the boys from Delta House, which gave me great expectations of a pretty raucous beer-fuelled time, and even a rendition of ‘Louie Louie’ perhaps? Suffice to say my interest was sufficiently piqued so I grabbed myself an early copy of their latest album ‘Living in Black and White’, cracked open a beer (or several) and gave them a spin…

Born out of the ashes of Off & Brau Sisters (a cult cover band, active since 2011) Animal House seem to have cornered the Italian biker market pretty quickly on their rise to fame so far. With appearances at Biker Fest, a full-page dedication in ‘Biker Life’ magazine, and even penning something of a biker hymn for the Bintars Motorgroup with their song ‘Bintars’ – which conveniently appears on this album, but we’ll get to tha later. The most exciting part for me is that my initial reaction was right, this bunch of rowdy rockers are named after one of my favourite films of all time! So I fully expect there to be buckets of booze and to have a sudden urge to don my toga after listening to this album.

‘Living in Black and White’ has a pretty booze-fuelled cheesy (but not too cheesy) power metal feel to it. If I were to try and pull out a comparison I would say that it’s pretty reminiscent of the earlier Bloodbound albums but with a vocal style that reminds me somewhat of PelleK (although not reaching quite the same heights!). It’s very much in line with the vein of upbeat power metal that’s been pouring out of Italy for quite a while, it must be something in the water (or the olive oil). There’s plenty of catchy anthemic choruses, wailing guitars and vocals at the higher end of the scale, and that’s exactly what we’re here for.

One of my favourite tracks, and the one that got stuck in my head the most, is ‘The Only Way to Live’. It’s one of the slower tracks (although not an out and out power ballad) with a relatively simple rhythm that keeps marching forward. There’s some fantastic guitar work though, with a cracking solo thrown into the mix for good measure. I really like the message of this song that it doesn’t make a damn bit of difference what your circumstances are, you should still chase whatever dream you may have. And hell, if that dream is booze, fast women and faster music then you’re probably in the right place.

Well, if this is endorsed by bikers everywhere, then I’m completely on board. It’s got the just the right level of cheesiness for me and I can imagine this being a pretty wild gig when we’re all allowed out to play again. I do think that they missed a trick by not including a cover of ‘Louie Louie’ to really reinforce that Animal House connect, or perhaps one of the other songs on the soundtrack. For me that would have turned a decent album into something pretty special, so perhaps it’s something for the Animal house lads to consider in the future!