And So I Watch You From Afar/Vogons/Civil Service – Huddersfield, The Parish – 15 June 2022 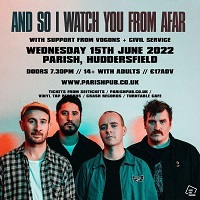 Still not quite over my Download festival hangover yet, I’ve fired myself over to Huddersfield to catch one of my favourite post-rock bands, And So I Watch You From Afar, supported by Vogons and, for the third time in about a month, Civil Service (they do get around a lot at the moment).

Kicking off the set for tonight, Civil Service are on a far bigger stage than Manchester’s Retro Bar, so it will be good to see how they sound on a much grander appearance than previous shows.

Right off the bat, the projection on a stage like the Parish is much better. Their ‘80s new wave inspired sound surrounds me even at the side of the stage. There’s a lot more room for the guys to move around during their performance, as well as more space to balance their gear out. One thing that stands out in this performance compared to previous is that their drummer does some really tasty fills and is on the whole a lot clearer due to having his kit mic’d up.

You can definitely tell they’re enjoying the bigger space for movement here though, jumping about on stage and scoping out being able to move around the front of the stage without knocking each other. It’s been good to see Civil Service on a stage with much better projection and space, I think it’s worked for them really well in the way that it lets their sound generally be much bigger. They’ve done a great job tonight and should be proud of their performance as well as being able to say they’ve supported one of the household names in post-rock.

After a brief break, Vogons are up next. For some reason these are a familiar name to me and I can’t remember where from – it wouldn’t be a stretch to think I’d seen them live before somewhere else. Either way it’s time for a bit of something more mathy than post: all the usual hallmarks of busy playing from every part of the band jumping between various time signatures and phrases. This is some incredibly bright playing, clearly very well-rehearsed and, by the looks, I don’t think they’re playing with in-ear monitors or anything either!

Math rock, for me, is something I am absolutely infatuated with in much the same way I am metalcore. The way Vogons are doing this set has really got its claws into me, especially with the sort of grooves that their bass player is playing; it reminds me a lot of Mark Michell (formerly of Scale The Summit). What also stands out is how in tune the bass and drums are with each other, their fills complement each other brilliantly while the guitars riff off each other and work around each other’s playing which creates some fantastic harmonies.  The main thing about Vogons is just how insanely tight this whole set is, some bits speed up and slowdown in sublime synchronicity, others have busy noodling against dreamy melodies, but the main thing is they’re all in perfect time with each other. Also looks like they’re at ArcTanGent this year too, so see you there lads.

Finally, it’s time for the main act, And So I Watch You From Afar. They really surprised me with their latest album, ‘Jettison’, so I’m looking forward to getting some of its tracks in my ears from a live setting. Not a band to avoid a nice atmospheric intro, under the cover of smoke machines and darkness, the band kicks off a cacophony of noise before getting things started. Showing off that they’ve been at this game for more than a few years, it’s already a grand swell of discord and soaring tremolo picking and it’s bloody loud as well!

The deliberate aesthetic choice for all their lighting to be behind the band with almost nothing overhead seems to imply that they’re trying to keep the emphasis on the music rather than the band themselves. They’re also doing a fantastic showcase of their older stuff which mixes in some more mathy elements and eclectic time signatures, the light show keeping up with the ebb and flow of their playing too. It says a lot about how ASIWYFA can go hard too considering I’ve never seen a mosh pit at a post-rock show before, but we certainly got one here tonight.

It stands out to me that post-rock is interesting in the way that a lot of it is instrumental yet is a genre awash with recognisable passages and melodic hooks that often stay in your head a lot easier than a catchy chorus. This works especially well for someone like me who is absolutely terrible at remembering song lyrics but remembers melodies almost instantly.

ASIWYFA put on display which shows why they’re revered as one of the best bands doing this sort of thing here tonight. The atmosphere they’ve created along with the intensity showcases their skill at creating music that surrounds you and takes you on a journey. I’m privileged to have been here to see these again and I certainly hope it’ll not be the last. If you have even a passing interest in math or post rock, you owe it to yourself to see these guys do their thing live, you won’t regret it.