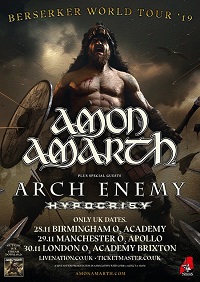 Amon Amarth and Arch Enemy are two bands that have been around for so long they’re essentially part of the furniture as far as extreme metal goes. To see them both on the same bill, supported by Hypocrisy, gives me reassurance that tomorrow morning I’ll be waking up with a ringing in my ears.

Walking in I always forget how much of a massive venue the Apollo is, and walking up to the stage you can see Hypocrisy’s kit setup, ready to go and looking very intimidating. The venue is steadily filling up with battle jacket sporting metalheads and the atmosphere is electric.

Hypocrisy start with a churning bass and familiar melodeath guitar playing, very reminiscent of Children of Bodom and older In Flames. What a guitar tone though, superbly crunchy and clear! You can tell from the crowd that Hypocrisy are playing to a set of potential new fans here, the crowd is nodding their heads but there isn’t a lot of movement. This doesn’t seem to faze them in the slightest though because they’re absolutely giving it some balls on the stage. A relatively short set in comparison with the other acts, but they did a fantastic job of warming the crowd up, definitely going on the “discographies I’ll be rinsing” list.

As Arch Enemy begin the venue is absolutely packed, they walk on to a melodic tapped riff, the build up to the incoming onslaught. Alissa’s growls at the forefront of relentless chugs and double bass pedals, absolutely putting most male singers to complete shame. ‘War Eternal’ sounds massive, the chorus provoking metal gurns from everyone and the solos absolutely melting faces unapologetically. The crowd is absolutely eating this up, they’re going wild, crowd surfers, circle pits, you name it.

Arch Enemy are a force to be reckoned with, every member of the band adds to something greater than the sum of its parts. Whether it’s the relentless rhythm section, the wonderfully melodic guitars or the guttural vocal growls, the entire show is a juggernaut.

Amon Amarth start with Iron Maiden’s ‘The Trooper’ with a large BERSERKER front curtain, the war awaits. The curtain drops to unveil the drum riser, a gigantic horned helmet – Amon Amarth are well known for their bonkers stage setups, previously this was a longboat!

Beset either side by runes that are literally on fire, they absolutely lay into the crowd. The singer admits to having a cold but you wouldn’t know it, not like he cares! The amount of fire in this show literally 4 songs in would be enough to make Rammstein blush. The stage theatrics are absolutely off the charts, fire, liches, giant Viking statues and not to mention the guys in chainmail! The sound is thunderous, sublime, a visceral experience. Amon Amarth are bringing war to Manchester and taking no prisoners.

Amon Amarth have the crowd in a complete frenzy, crowd surfers all over the place, a sea of long hair being whipped around and a gigantic circle pit right smack in the heart of the floor. Some of the final theatrics of the night being Johan (vocals) being thrown a large hammer to fight off the gigantic serpent which has coiled itself around the stage, it’s a little corny but I’d be lying if I said I wasn’t bought into it and killing myself laughing at it.

Raise your horns, we are all Vikings tonight.