Agent Steel – ‘No Other Godz Before Me’ (Cherry Red/Dissonance) 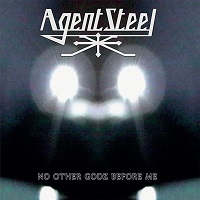 Back in the mid-80s, before the internet, downloads, streaming etc, one of the best ways to discover new bands was the good old compilation album. When it came to the thrash/speed metal explosion of that era, the first port of call was the excellent ‘Speed Kills’ series that Music For Nations/Under One Flag put out. In 1986 ‘Speed Kills II:The Mayhem Continues’ got off to a blistering start with Agent Steel’s ‘The Calling/Agents Of Steel’ sitting pride of place at Side One Track One. It became an instant classic, but the band only lasted two albums and one EP before disbanding in 1988. Now original vocalist and founding member John Cyriis returns with a brand new line up for his first Agent Steel album in 34 years – ‘No Other Godz Before Me’.

The album that the aforementioned ‘Agents Of Steel’ came from was Agent Steel’s 1985 debut ‘Skeptics Apocalypse’, an album that captured the energy of the thrash explosion that was happening at the time, added the influence of Priest and Maiden, perhaps a bit more of a melodic sensibility than some of the band’s contemporaries and stood apart due to Cyriis’s distinctive high-pitched operatic vocal style, which wasn’t to everyone’s taste at the time. It’s an album that has endured ever since and rightly become regarded as a speed metal classic that has been re-released on numerous occasions over the years, not always officially. So all those years later, can the magic be re-ignited and what will Agent Steel sound like in 2021?

History has seen many reformed bands return decades later and try to re-invent themselves, update their sound and fall flat on their collective faces. That’s a trap John Cyriis have cleverly avoided with ‘No Other Godz Before Me’. He has clearly recognised what he is known and loved for, which is primarily that ‘Skeptics Apocalypse’ album, stuck to the formula and delivered an album that sounds more like the follow up to that album than 1987’s ‘Unstoppable Force’ did at the time. In the process he and his new band mates have delivered an absolute speed metal belter.

All the trademarks are there – the soaring high pitched vocals that sound incredibly intact, the pure speed, and of course the lyrical themes of UFOs, alien abductions and differential anthropology. Aside from the eerie opening intro of ‘Passage to Afron-V’ and closing section of ‘Entrance To Afron-V’ nearly every track charges out of the speakers at a relentless pace with the likes of ‘Sonata Cosmica’, ‘The Incident’ and the title track boasting particularly killer riffs. ‘Veterans Of Disaster’ does take the foot off the accelerator to some degree, but makes up for it in crushing heaviness. The underlying melodic element is still there too, and there’s strong and skilled guitar work throughout.

John Cyriis should be applauded for recognising what he does best, and what the fans want, and sticking to it. ‘No Other Godz Before Me’ is a triumphant return to Earth for Agent Steel.