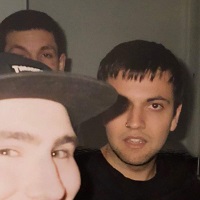 As punk rock bands go, Aerial Salad are very much babies in the field when you consider the late ’70s/’80s heyday of the genre, though it’s great to see such an up and coming band keeping faith with the old school in your face attitude of the greats before them. A sophomore full-length release can be a more daunting prospect though and has been a real thorn for so many bands, so it’s time to see how the trio have managed to cope with expectations.

To put it simply, they’ve continued doing a sterling job of what they’ve done before. The same energy, passion and attitude is still there, when they’re doing the stress relief of certain things in ‘Stressed’, or the more nuanced starting ‘Romance’, with its shout-along chorus of ‘DO YOU WANT ROMANCE?’ sure to be something fans quickly pick up on in a live setting. There aren’t any tracks on this I actually don’t see transferring well into the live arena, though I would expect that ‘Virtue’ alongside the aforementioned tracks would be the first ones incorporated into their sets.

The overall tone of the album is clearly one of day to day life in an urban environment – Manchester can definitely be classed as that! – with the different manners and ways and means of daily life, whether that be coping or just living your life. There are a couple of pretty good guitar hooks to keep you interested and the relentless nature of their approach and no-nonsense tracks means there is no chance for your mind to wander or boredom to set in, as they concentrate on getting their message across with each song and leave no excess in. There is a definite hint at some of the Madchester 90s scene in some of the guitar tones which is actually quite understandable as an influence given their location, though this is at no detriment to the overall sound, more it almost being transcribed across into that balls to the wall rock end of punk in a fitting manner.

At 26 minutes, it’s not the longest album you will ever hear, even in the punk genre, but there are some genuinely good tracks on this and certainly enough that you should definitely consider purchasing this release. It is very much in the mould of The Vibrators and bands of that ilk in their rock end of punk that this release sits and it holds it’s own alongside a fair few of their contemporaries, boding of a bright future for the trio.