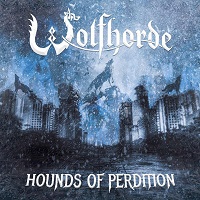 ‘Hounds Of Perdition,’ the second album by Finnish genre-benders Wolfhorde is an eclectic affair. Theoretically they’re a folk metal band but there’s far more to them than that narrow definition suggests. Over these seven tracks there are elements of black, death and power metal, not to mention traditional folk music and grandiose cinematic scores. It’s an ambitious and impressive release that’d even impress Wintersun. This is folk metal that dares to push against its own clichés and ‘Hounds Of Perdition’ is a highly rewarding listen.

What’s especially noticeable is how much variation they manage to cram in. The opening ‘Chimera’ is a huge song; clocking in at nine and a half minutes and vaguely resembling Ensiferum doing a Chthonic impression. The East-Asian melodies give it an added emotional depth and as it unfolds, it’s difficult not to get swept up in the over-indulgent atmosphere. In contrast, ‘Doctor Of The Plague’ is barely half that length and has more of a death metal vibe, while the ace ‘Black Song’ is a big power-metal anthem. There’s a jaunty Finntroll feel to the chorus, an electrifying solo and a booming vocal performance from singer Hukkapatka (we don’t know his real name).

This in turn is followed by the ragged black metal opening riff to ‘Towers Of Silence.’ This one is marginally slower than its predecessor and comes complete with loads of background chanting during the chorus, almost as if a dozen Benedictine Monks wandered into the studio and joined in with the recording. It’s the kind of track that could convince Batushka fans to listen to folk metal more often and is another string on an already diverse bow. ‘Forged In Ice’ sees the Monks return, along with what appears to be an entire orchestra and some glorious Maiden-esque guitar work.

‘Kill The Light’ returns to the dark-power melodramatics of ‘Black Song’ and possesses a real earworm of a chorus. The closing title track however is another epic, albeit with less of an oriental feel than the opener. It’s another imposing collection of driving rhythms, exceptional musicianship and growls deeper than a Balrog’s cave.

If this gives the impression that ‘Hounds Of Perdition’ is a bit scattershot that’s understandable, but even with each track being a distinct entity, Wolfhorde still sound like Wolfhorde.  A huge amount of work has gone into crafting this album and the results are genuinely eye-opening. This is folk metal with a progressive edge and if you’re of the mind that the genre is nothing but drinking songs, stick this on. It’s well worth it.