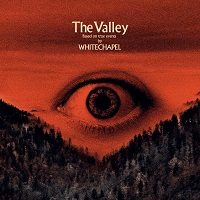 Whitechapel are back with ‘The Valley’. Offering up ten new tracks with an almost autobiographical angle to the lyrics of Phil Bozeman. The frontman states that the writing takes inspiration from his childhood and reflecting on those memories from now.  Since their debut in 2007 with ‘The Somatic Defilement’, Whitechapel have consistently had a dark and intense sound to their music, having grown and evolved but never really deviating from this darker territory. Their last record was a product during inner turmoil for the band, as such they’ve stated that they were not one hundred percent happy with the output, though they still remain proud of 2016’s ‘Mark of The Blade’. ‘The Valley’ sees the band unifying once again and evolving further as a musical force to deliver an intense, emotionally charged album.

Album opener, ‘When a Demon Defiles a Witch’ begins with arpeggiated clean guitar chords before kicking into the heavy weight signature sound of Whitechapel. The ferocious rhythm section sets the tempo coupled with distorted guitars providing the towering riffs. The vocals of Bozeman tear through the mix with guttural power delivering a dark intensity to match the music. The chorus sections open up with a rich melody allowing more space for the music to flow, the mixture of vocals from raw power to a cleaner edge allow for a greater dynamic shift. ‘Forgiveness is Weakness’ further enhances the aggressive power of the band, hammering through a pounding rhythm and high tempo riffs from start to finish. It’s the shortest track on the album and represents a tightly packed punch of technique and musicianship coupled with a raw intensity.

With a dialled back tempo from the opening two tracks, ‘Brimstone’ offers a deeper groove to the driving rhythm with crunching guitars further enhancing the brooding feel. It’s a wall of sound of full instrumentation and powerful growls from the vocals. The slightly restrained tempo and altered groove creates a track with a relentless chug movement that feels unstoppable. ‘Hickory Creek’ provides a standout moment on the album. Clean guitars washed with reverb introduce the track creating a feeling of sweeping space before the texture is rounded out by the remaining instrumentation. The aggression of the music has been dialled right back typified by the vocals.

Bozeman opens up his singing as opposed to the powerful guttural style that has been the norm, the clean melodic vocals give the track a whole new dynamic. All of these elements together make ‘Hickory Creek’ a standout respite from the swirling sonic attack thus far. While the production on the previous tracks is excellent as it is throughout the album, here it is really exemplified. The precision of the rhythm section is showcased along with the duel guitars providing the key melodies and riffs. All the instruments are well layered and clearly identifiable while the track has natural room with the vocals sitting on top of the mix with perfect clarity.

‘Hickory Creek’ feels like a deep breath as the latter part of the album launches back into barely restrained brutality in the form of ‘Black Bear’. A catchy staccato guitar riff provides the key foundation backed up once more by the intense drums and bass. The vocals are back to business with a raw intensity, they stand out in stark contrast to the clean delivery of the previous track. The intensity is further increased with ‘The Other Side’. Frantic palm muted guitar chords accompanied by brutal drumming sets the tone as the vocals kick in. The track also features one of the best guitar solos on the album, the dynamic shift of the song structure and the production mix allow the lead work to take full centre stage of the music. The solo melody rises and falls and reaches a natural peak before the whole track returns to its original rhythm.

‘Third Depth’ features a call and response element to the vocal delivery. Initially a clean vocal line comes in with the introduction however, unlike ‘Hickory Creek’, the clean lines are not a constant. The guttural style kicks back in creating a powerful contrast between the different vocal sections. ‘Lovelace’ and ‘Doom Woods’ see the album to a close. The former track is a frantic sonic assault with a solid underlying melody hook. There’s more anger and desperation within the track as the vocals feature screams of ‘Help Me’ punctuating the ongoing narrative. ‘Doom Woods’ brings together the culmination of the dark, brooding atmosphere that has permeated the whole album. The sound scape created by the guitars at the intro gives way to aggression and power as the full instrumentation kicks in. The structure leads the music through different phases, all the while a driving rhythm urges everything forward. There are sections where the sound opens up and the melody shines through to lift the feel of the music but the crushing wall of noise keeps the music rooted in an inescapable blackness. The fade out features clean electric and acoustic guitar work with an overdriven sound scape in the background texture. This gives both the track and album as a whole a feeling of clear finality.  The anger and darkness have been exorcised and there can now be calm.

If there’s criticism to be found it could be considered that musically there is not much separating the tracks. There is a full-on sonic attack from start to finish. This could potentially lead some to find the wall of noise impenetrable and not be able to see past the furious rhythm and throat tearing vocals. However, the musicianship clearly shows the levels of intricacy and subtlety that this album has, it is more than a sledgehammer of deathcore noise. The production values of the record tie in with this as there is clear audible space between all of the instruments and the mixes allow for the layering of the structures to become apparent.  The song writing features a narrative throughout based on the lyrics of Bozeman, as such the music represents this and presents a unified sound between each track.

Overall, ‘The Valley’ is a great album. It represents a band unified and energised, producing the music they want to make and play. It packs a weighty punch with the song writing and excellent production throughout. The music is intense, brooding, dark and really, really heavy. If you’re a fan of Whitechapel already this album will not disappoint, there is all the elements of their pre-existing sound but a level of growth that keeps their style fresh. If you’re looking for something darker than your current listening taste but retain a core melodic element, then ‘The Valley’ offers that in abundance.