Various Artists – ‘A Slight Disturbance In My Mind’ (Cherry Red/Grapefruit) 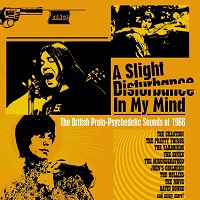 As a person who has been, at times, accused of living in the past with their music taste, the idea of a thee-disc, approaching four-hour compilation of neo-psych from the heady days of the ’50s and ’60s sounds ideal. Add in some better-known artists to some that were previously unknown to me – I am not quite 40, after all – and it seemed like a good chance to expand my knowledge of those times.

To be fair, I was absolutely correct in my thoughts beforehand. With names like The Yardbirds, David Bowie, Marc Bolan and The Kinks, among many, many others, there’s a good mix when put against the likes of Loose Ends, The Wimple Winch and The Brood, with a few of the artists having two tracks on the compilation meaning there’s a pretty good spacing out of artists you do know to those maybe beyond your previous knowledge.

While I am not a fan of The Beatles by any stretch of the imagination – there’s only so often you can have them mentioned when you say where you’re from before it becomes tiresome quickly – it is undeniable how much influence they have had on a lot of the bands on this compilation. There is definitely more than a hint of the more psych era Beatles tracks across a fair number of the tracks on this compilation, though not in a manner that actually bothers me, which is of good credit to the compiler, as this was a potential major landmine for me in this.

Even for the more widely regarded artists such as David Bowie, there are some tracks I have heard before, such as ‘I Dig Everything’ above, albeit being quite far removed from the kind of sound that he became more famous for across the years, certainly sounding very different from other tracks such as ‘Cat People(Putting Out Fire)’ or ‘Let’s Dance’, which people may be more familiar with by him. His earlier work being more inclined towards this kind of work puts an even better picture of the development of his sound throughout his career when you put this alongside ‘Queen Bitch’, the aforementioned through to his last album ‘Blackstar’ and quite how he shifted with the times after first finding his feet among the more psychedelic glam when he was starting out, giving plenty more food for thought for even someone as renowned as him.

One thing that particularly stuck out for me was ‘Stroll On’ by The Yardbirds. I had the album on for the first playthrough as I worked through some emails and when it kicked in, I thought it was ‘Train Kept A-Rolling’, which it clearly samples heavily, before having a look when the different lyrics came in, thereby discovering the reason it got switched around into this new track (copyright issues for the original being used in a film, in case you-re wondering!). While this was a high point, equally so was finding so many new (to me) artists that will lead me through many looking glasses and down a lot of rabbit holes in the near future as I look up other works by the bands on this release and further expand my own musical knowledge of the era several times over!

In terms of being listening again in the future, I undoubtedly will do so. There is plenty of material that was previously unknown to me, even with most of the artists I already had a level of familiarity with, leading to a good scope of future YouTube searching to track down which albums to buy from certain bands on here. If there is any criticism to be had, it’s that there is a similar feel to a lot of the tracks, though for me, this is not a downfall of the compilation, more a nod to the fact that the scene being as it was then, there was definitely a case of a lot of the artists finding their sound and their own feet musically. Even a single playthrough gives you almost four hours worth of enjoyment, so that puts it down as good value if nothing else. A creditable release that will be a good starting point to expand your knowledge into that musical sphere, should it hit you as it has me.