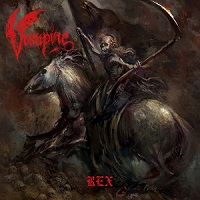 This declarative third album from Swedish night stalkers Vampire crawled out of the dank sewers of Gothenburg and into ÜR’s inbox around a month or so ago, but somehow got mired down in the folder marked “must give that a listen when we get a chance”. Events conspired to make sure that it sat in there for a few weeks, until it came time for a bit of spring clean and it popped back onto our radar – and, boy, are we glad it did, as it is a hugely impressive offering from these blackened deathmongers.

Vampire – made up of members with the characteristically Scandinavian habit of employing suitably enigmatic stage names, in this case Hand of Doom, Black String, Sepulchral Condor, Command and Abysmal Condor – specialize in very raw, speed/thrash style of death metal that reflects the genre in its nascency, with an immediate sonic comparator being that of Danish neighbours Mercyful Fate, especially in HoD’s vocal delivery and the twin guitar intonations of Messrs String and Condor, while there are also strong references to early Slayer (which is perhaps almost inevitable) and European thrash/DM progenitors such as fellow countrymen Dissection..

As its title suggests, ‘Rex’ is an imperious album. While touching many of the reference points mentioned above, it is a strong and confident exemplar of the genre, which doesn’t need to push any generic boundaries but works because of its honest-to-goodness adherence to the formulae which have served DM proponents so well for so many years. It works on the simplest of levels: that of pure enjoyment, unhindered by technical wizardry or over-complications in terms of unnecessary additional arrangements or fancy production techniques. In fact, the rawness of the production adds to the album’s appeal, exuding a genuine affection for their art and reflecting the fun of creating same.

It may seem somewhat misplaced to describe an album of such macabre lyrical themes as ‘Rex’ as “fun”, but I found it to be a hugely enjoyable listening experience, and have revisited it several times since moving it to the top of my “to do” pile. And you can’t really give much more acclaim to an album than to give it repeat plays. And it certainly shall get quite a few more here at ÜRHQ!