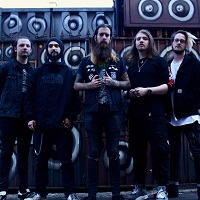 Proving that heavy metal does indeed span the length and breadth of the Überverse, politically-charged London-based progressive hardcore/deathcore quintet Viatorem draw their members from across three capital cities, two continents and multiple different timezones. First impacting last summer with their debut EP, ‘No Saviours No Kings’, they are now following that up with a new two-track offering, which leads off with a timely cover of RATM’s ‘Bulls On Parade’, which lands this coming week.

Always being a website that champions exciting new, and especially DIY, bands and sounds, we took the opportunity to catch up with this multi-national combo with the common tongue of heavy metal coursing through their veins to find out a bit more about them and what makes them tick. With this feature being titled ‘Über Rock Introduces…’, the traditional starting place was to ask them who they all are and where they’re from…

How did you come together as a band?

Rodrigo and Serge have been friends since childhood and founded the original project roughly two years ago, with Pip and Ross joining soon after, and Finn joining after the recording of our debut EP. After stumbling across him working on his blast beats in a practice room at university, Rodrigo and Pip popped in and asked if he wanted to audition and the rest is history.

Rodrigo was trying to find an alternative language or dialect for the word ‘messenger,’ signifying the political themes and message the band wants to convey. He ended up finding it in Latin: Viatorem.

As with a lot of modern metal bands we’ve struggled to fit ourselves neatly into one specific genre. For example on ‘Despair’, the final track on our debut EP, we found ourselves crafting a relative “ballad” considering the overall sound of the band. But in our track ‘Exalt’ (also on the EP but also re-recorded and remastered as a B-side for our next single), we hit many sub-genres such as deathcore and metalcore, and ‘Obsolete’ is basically slam. With every new release we’ll be a little closer to our specific genre, it’s still early days! But we’re also not too concerned with where we fit in, so long as we keep getting to make the music we want.

We actually made a public Spotify playlist for this exact reason, with all of us having such different influences that we wanted to let our audience enjoy them all the way we do. More specifically though:

The reason we’re doing this feature is because you’ve got a new EP coming out. Can you tell us a bit about the two songs on it? You’re an overtly political band, in terms of your lyrics, so what issues are you addressing this time around?

Coming off the back of the latest resurgence of the BLM movement of 2020, we found no better way to express our views on the events than by following in the footsteps of one of the biggest politically driven bands on the planet: Rage Against The Machine. The original track that follows, ‘Exalt’, tackles the structures of power and political influence of the Catholic Church, specifically with regards to its disgusting attempts to cover up child abuse by its priests, and more generally about how unjust social hierarchies have been and will continue to be the slow death of humanity.

We obviously need to address the biggest elephant in every room in the country, and that is Covid… how did it affect you in terms of writing and recording the new EP, and did you have to change the way in which you approached the process?

We managed to write about 90 per cent of ‘Bulls on Parade’ in-between lockdowns, with it being finished remotely during the recording section of the release. ‘Exalt’ was re-thought and re-recorded during lockdowns, mainly focusing on the mixing and mastering which was passed on to our good friend Wynter at Sphynx Studios in Brighton (who absolutely smashed it). We’re still establishing our new way of working as a band within these lockdown rules and restrictions, and thankfully finding ourselves more used to the process by now, and able to put in some serious work on our next release.

The ongoing pandemic, and continuing lockdowns, have made it extremely difficult for bands to get themselves noticed, particularly in the absence of live gigs. Social media therefore has played a much bigger role than maybe it has until the pandemic hit. How important are tools like Facebook, Instagram, etc., to you in terms of reaching out to, and interacting with, fans and winning over new ones?

Social media and the connection it gives you with fans are definitely a blessing and a curse, but as we only really established ourselves in the public eye during this pandemic, we’ve had to really focus on our social media presence and content, as we’ve been unable to support our debut release traditionally by playing shows. This in turn has pushed us to be a little more creative and imaginative with our output and content, and we’ve had to think of new ways to stay interesting that will definitely influence the future of our work.

Streaming media, such as Spotify, has also a lot more important to many bands in terms of getting their music out there. However, the financial returns for streaming can mean a band doing a lot of work for relatively little reward – i.e. you earn very small percentage returns, with the services themselves taking large chunks of your potential income. Is it worth the effort, or is it a fact of the business that you just have to accept?

Income has never been a main focus of the band, with us mainly wanting to portray our political message (hence the name Viatorem) and enjoy ourselves doing what we love. Plus, no-one joins a niche political metal band to make money!

A lot of bands have gone down the live streaming route. And a lot of them are charging their fans for watching the shows. I know there are pros and cons to “free” versus “pay per view”, but as a young band I’d be interested to know if, in the current situation, it is more important for you to get your music out there than to make money, out of doing so? I guess the point I’m making is “is it worth some short-term pain for long term gain”?

Unfortunately, “short term pain for long term gain” is pretty much the defining element of any new band starting out in the current climate – streaming pays pennies (if you’re lucky) and merch, gear, tour expenses etc will all be coming out of your own pocket for a long time. But if you’re here for the right reasons it’ll all be worth it in the end.

I guess that’s enough of the doom and gloom about financial travails, etc… As we mentioned above, you’ve a new EP coming out later this month. So, what can we expect next? Another EP? Or is there a full album on the horizon?

We are currently working on our next EP, which will be hopefully coming out towards the end of the year, but there is indeed a full album on the horizon! You can look forward to our full-length release around summer 2022.

A final couple of questions: when live gigs are finally up and running again, and you have your choice of any bill to be a part of, who would be the three other bands (signed or otherwise) you would choose?

Bound in Fear, Malevolence and our brothers in Shibboleth.

Finally, imagine you’re headlining somewhere like Wembley Arena: what is the most OTT thing you would put on your rider? 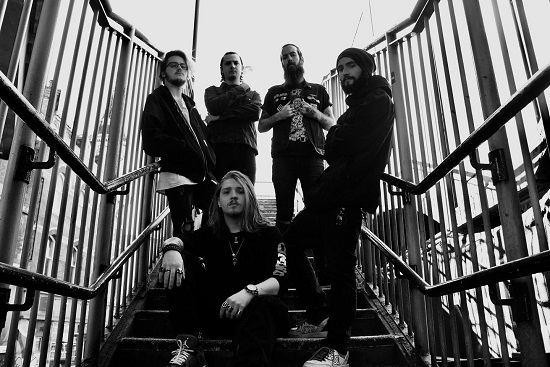