Now and again, a young band comes along who pique our interest sufficiently to make us want to delve more into their story and give them a little more exposure than a mere single or EP review… So it was that, during the week, I took a break from travelling the length and breadth of the Über Kingdom to fire up a Twitter feed and catch up with the guys from Scottish newbies A Month Of Sundays, who release their debut single, ‘Kingpin’, this coming Friday (12 July).

However, before we find out more about the lads – frontman Aarron McIntyre, guitarists Ryan ‘Gunny’ Gunster and Mathew McIntyre (who unfortunately was unable to take part in our chat), drummer Ian ‘Moony’ Duncan and bassist Craig Taylor – their background, how they started out and the band’s future plans, let’s have a listen to that all important single, shall we?

So, how did the guys all meet in the first place?

Moony: I met all the lads through the Join My Band site. They were looking for a drummer who was wanting to play in the same style as the Rolling Stones, The Who, Stone Roses, The Byrds, The Verve and Oasis. Right up my street.

Ryan – I decided to pick the guitar back up and get back into it after a few years of letting life get in the way of me playing and being a bit lazy with it. As soon as I found my feet again with it knew I wanted to do more than be a bedroom guitarist again and I had a look on the Join my Band website to find other lads with a similar musical interest, and to be honest I couldn’t have found a better fit

Aarron: Grindr – joking! Me and Matty started the band a few years back and met Craig on Christmas Eve at the pub and started talking music with him, we told him we were needing a new bass player so asked him to come and jam and we got on instantly and he’s stuck around since.  We went through another line-up change last September-ish time and put an ad via Join My Band and got a reply from a geezer who looked like Brian Jones called Ian. Arranged a jam with him and quickly adopted the nickname Mooney. Within a week we had another reply from Ryan who also had a post up looking for a band similar to his influences. We chatted about our hatred for spicers and our love of parkas and one Oasis orientated jam later, the band was complete.

Ryan: Join My Band is basically band Tinder though!

How hard is it to practice together and write, given the distance some of you have between each other?

Ryan: To be honest practice is good for me, I live centrally between the rest of the lads, so we meet in Dunfermline where I live. I imagine for the others it’s a bit of a pain all the travel for practice, not my problem though. Writing isn’t my strong point, although I am trying to improve on that, so Aaron and Matty tend to do the writing bit. Thankfully the distance isn’t too much of an issue, we all bring it together at practices to bring it to life.

Moony: It’s not that hard or too much of an inconvenience. Bit of travelling but it’s worth it cause we’re all dedicated and love playing and writing music together.

Ryan: For the sake of confusion I am also known as Gunny! 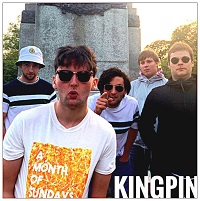 DJ: You have your debut single, ‘Kingpin’, coming at the end of this week. How long did it take you to write and tweak until you were happy with it enough to start getting ready to put it out there?

Ryan: When I joined the band the lads already had a few tracks they had written so couldn’t tell you how long that took them, probably not long, they seem to be geniuses with this sort of thing. However with obviously the addition of another guitarist in myself we had to adapt the song to fit, we jammed a few times and I came up with a few solos, and so did Matty, we trialled them a few times and picked the best lead parts, I wouldn’t say it was a quick process because there were a few changes made last minute. But the actual song itself, I don’t think it would have taken Aaron very long, he’s great at this sort of thing!

Aarron: In terms of writing it. It took me ten minutes to write the lyrics and structure and it rolled so easily, like all great tunes do, and all In which remained all the way too recording. In the studio, we tweaked with bits here or there too really get it as emphatic as it should sound, which took roughly two sessions.

Will ‘Kingpin’ be a stand-alone single or is it a precursor to a forthcoming EP?

Aarron: We will be getting stuck into the EP this summer with recording and that, but you’ll see that soon enough. If your readers fancy a bit of ‘Kingpin’, then they should get on that!

Are you guys already planning gigs, or is that maybe a touch further off for yourselves?

Ryan: We have actually done a lot of gigs for the short time we have been together as a five-piece. I joined in September and we played our first gig as the opening act on 1 December for The Roov. Since then we have played a handful of gigs including King Tuts in Glasgow, which for me personally was a dream come true, with the Oasis connection. But, yeah, we’re gigging fairly regularly and looking to line up some more as soon as possible

Aarron: A lot of gigs in the pipeline, festivals possibly too. Still a lot to be announced but things are happening man, so keep a keen eye!

What do you see as the biggest problem you’ve had so far and how did you get past it? 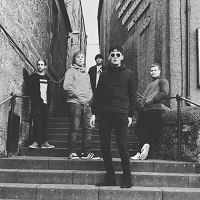 Ryan: To be honest, I’ve not really noticed any problems we have had… probably the lack of animosity between the two brothers! Hopefully, as the band grows, they’ll start having fights and stuff, like a real rock ‘n’ roll band.

Moony: Trying to change Aarron and Matty from being Rangers supporters!

Aarron: Just the fact that our drummer’s team’s shocking!

You’ve mentioned the likes of the Rolling Stones and Oasis as influences for yourselves earlier, is there a band, in particular, you’d love to tour with?

Ryan – Tough one, as Oasis aren’t together anymore I would have to choose between Noel and Liam, and I can’t pick between the two, so I would have to say the Stones, they would have some amazing stories to tell on the road as well as everything we idolise about them musically.

Moony: They’re all dead or finished up. Touring with Liam since Oasis are over, I suppose.  He is a massive hero to us!

Aarron: If I never heard the Stone Roses, I never would have started a band or got into music so everything I’ve ever done is because of them. But they aren’t touring any more so I’d say LG or the Stones of course.  Not an Ian Brown solo fan, so no one else in particular.

Craig – Touring with Richard Ashcroft would be amazing

Looking forward, what do you see as the next big step for yourselves after the EP?

Ryan: Getting out and hitting as many towns and cities we can get into, making people aware of who we are, what we’re about and bringing guitar music back

You can pick a festival to headline – which would you pick and why?

Ryan: TITP, sadly is no more, however, I would have loved the opportunity to play there. Having been in the crowds a few times at T, I can’t pick a better atmosphere to be playing in… everyone seems buzzing, loud and up for it.

Aarron: Glastonbury. So that Stormzy and all these other tinkers who are top of the pops aren’t.

Moony: Isle of Wight ‘cause of its heritage. Great bands like The Who, Jimi Hendrix, the doors and many great acts played there. Stick in Woodstock too

Craig: Gotta be Glasto for me lads!

OK, one final question for you, lads. There are all sorts of stories of weird and wonderful rider requests from various bands across the years. Have you got an idea of what weird shit you would each ask for, should you become an arena headlining level act?

Ryan: I’m struggling to think of anything particularly weird, crates of Disaronno on ice would be handy, maybe I will get a bit weirder as we go. Maybe the power will go to my head and I’ll start demanding anything and everything… until then, Disaronno and ice keeps me happy

Moony: I’d like my vinyl collection so we can play records backstage and chill.

Aarron: Weird rider requests? Big question man. I’d have to say extra fresh mint chewing gum, man, and 15 Dr Peppers! I’m proper mad for if my breath smells OK, but other than just your standard set up man. Plenty of booze for the lads and ladies!

Craig: I’d say a 12-string backstage to mess about on and a fridge full of beer.

Aarron: Someone to make me cups of tea and rub my feet!

It’s been great chatting to you lads.Where can our readers get your debut single from?

Ryan: Thanks for having us man, it’s been a pleasure. You can all get our debut single, ‘Kingpin’, on all major music platforms, Spotify, Apple Music etc on 12 July. It will be the first step of a huge journey ahead for us so keep your eyes and ears open for us!

Aarron: So, go get some – and tell your neighbour!