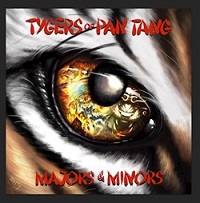 NWoBHM veterans Tygers of Pan Tang return for 2021 with a collection of tracks taken from their extensive back catalogue.  Focussing on the last thirteen years the tracks compiled offer a snapshot of why Tygers deserve their highly regarded reputation and shows that their legacy continues to grow. Rather than looking to simply cobble together a best of, the band have also looked to include a few exclusive cuts and releases in order to make ‘Majors & Minors’ more than just a stop gap release.

Diving straight in with ‘Only the Brave’, anyone new to Tygers are quickly introduced to their sound and style.  All the trademark elements of the NWOBHM scene are contained within the five minutes and eight seconds of the album opener. The formula of galloping guitars, chunky riffs and memorable hooks is executed with precision.  The whole band are a tight unit producing a slick, classic sound with all the elements clearly identifiable.

Moving into the album, tracks such as ‘Destiny’ and ‘She’ offer up more straight down the line rhythm sections.  The four on the floor beat of the kick drum demands a corresponding foot stomp from both compared to the more relentless pace of the opening track.  Again, both offer up a new element of the introduction for those that may be unfamiliar with the band while also being highly enjoyable for established fans.  ‘She’ also features some flamenco style acoustic licks mixing up the stylistic delivery of the music. It also has copious amounts of cow bell which is never a bad thing!

Throughout the album there is something for all fans both old and new.  The inclusion of arguably their biggest tracks should be enough for the wide array of Tygers fans out there.  Having access to this number of solid tracks in one place is never a bad thing.  In addition, there is bonus tracks of an orchestral mix of ‘Spoils of War’, the never before released on CD ‘Plug Me In’ as well as ‘What You Say’ which hasn’t been on an album format before. These three gives something a little bit more for the older fans and collectors and a unique edge to ‘Majors & Minors’ over other compilations.  For the newer fans, you’re given a slice of how Tygers do things their way when it comes to the NWOBHM sound they are forerunners of.  From the previously mentioned tracks to the sing-along numbers like ‘Glad Rags’ and relentless head banger friendly assaults like ‘Damn You!’ and ‘The Devil You Know’ you can really get a sense of what they are capable of and should encourage interest in their older work too.

As with any compilation there will always be a case of some fans perhaps bemoaning that their personal favourite track was omitted and that they may not agree with the inclusion of others.  However, with ‘Majors & Minors’ Tygers of Pan Tang have definitely delivered and album that will sit well with any super fans collection as well give something hugely enjoyable to new and casual fans as well as those who are just looking to expand their metal collection with the inclusion of metal legends.