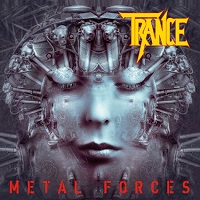 You’ll have no doubt have heard of Accept and Scorpions who are both longstanding legends of the German metal scene and can arguably be described as classic heavy metal. But I’ve recently been made aware of another band who knocked boots with these titans and worked alongside them to cultivate that sound we know today – a little band called Trance. Of course, the reason they’ve come to my attention is because the lucky dip bag at ÜRHQ has yielded a shiny new release from the guys which promises to be a show of ‘Metal Forces’.

Trance is a band who have really been through the motions since its inception in 1974 with a brief name change to Trancemission at one point a revolving door of band members before calling it quits in 1998. Over the years, guitarist Markus Becker found himself at shows featuring cover bands who were bashing out Trance songs to crowds that were going wild for it. So, in 2011, the time was right to resurrect Trance resulting in 2016’s ‘The Loser Strikes Back’ and that must have gone pretty well because here we are in 2021 with another outing from Trance.

So, I got myself settled in and took ‘Metal Forces’ out for a spin and my instant reaction was that it was very “Anvil” in that it has that robust classic metal sound. It’s the kind of thing that I can imagine would fly pretty well on something like Planet Rock, and would definitely appeal to those who like their metal to be energetic but not overtly heavy. It’s funny actually, because after making this comparison, I did ater find out that Trance toured alongside Anvil a few years ago, so I guess I’m not the only one to make that connection! The guitars harmonise well together and the rhythm section backs this up with some solid fast-paced grooves which paves the way for the high wailing vocals of Nick Holleman (if that’s not nominative determinism, I don’t know what is…)

‘Deep Dance’ is probably the most memorable track from the album. It starts out with a thumping drumbeat that resembles something pretty industrial and it thunders its way in the background like an unstoppable machine. This constant is accompanied by a catchy guitar riff and plenty of wails from their energetic vocalist. The more I listen to it, the more I’m reminded of the recent Bloodbound album and I realise that ‘Metal Forces’ is starting to toe the line between classic heavy metal and power metal at this point.

Overall, it’s a pretty solid album that is accessible and easy to listen to. It’s not something that has completely set my world on fire though, but I imagine there are people out there who will find themselves en-Tranced by ‘Metal Forces’. Certainly something here for fans of Anvil, Accept and even bands like Guns N’ Roses, Bloodbound and probably even Iron Maiden. I would say that it’s worth listening through at least once to see if it gives you that warm fuzzy feeling, and I suspect that Trance may be one of those bands that you need to catch in the flesh to really capture the magic. For them to get back in the saddle after nearly 20 years out shows that there must be something worth giving a chance!