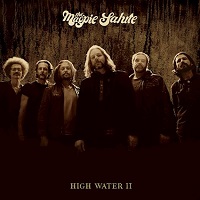 The Magpie Salute will quite possibly not be news to many of our readers. Despite being about to release their second album, Rich Robinson already has quite the reputation from The Black Crowes and deservedly so. So how does this fare against the similarly titled ‘High Water’ from last year? Frankly, they’ve turned the notch up a touch more.

Not having the time to cover ‘High Water’ myself was to my chagrin, though it quickly became a regular rotation for me on my travels after release when I grabbed myself a copy and it’s good to see that the band have continued in a very similar vein with their latest release. The sound harkens back to a time fo good old fashioned rock and roll, a time when the riffs were plentiful, the spliffs likewise but before we quite hit the quiffs again. While the likes of Black Stone Cherry often seem to have their roots in Black Crowes material, Rich Robinson’s distinctive guitar playing and songwriting means you could say an equal footing would be similarly achieved, had these guys recorded around the same time.

The two videos released so far, ‘Gimme Something’ and ‘In Here’, are perfectly good representations of what to expect from the album in general. Be it John Hogg’s soul-drenched vocals crooning or belting out the words, Rich’s guitar licks or Matt Slocum’s keys, all of which take turns at being centre stage through the album, there is just something almost uplifting about the songs, even songs like ‘You And I’, which feels a lot more personal without losing any of the power of the rest of the album. This is in no way to denigrate neither the drums nor bass, both of which are adeptly played, just their constant keeping on in the background means the extra care is needed to properly take in their talents.

Frankly put, this is a sumptuous release that will be joining its predecessor in rotation amongst my travelling music. It builds upon the strong debut release last year and takes it up a touch more, showing a slight but definite improvement, despite being completed very soon after the first, as they have gotten even more used to each others style of play and songwriting. Get it in your ears, you absolutely deserve to hear this yourself.