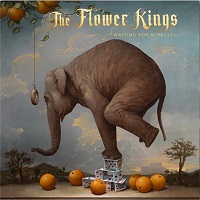 A mere quarter of a century into this particular aspect of their career, The Flower Kings are back with ‘Waiting For Miracles’, something the entire planet seems it could do with at this juncture in time. Anyone with even a vague interest in the softer, more traditional end of prog rock should have heard of these guys, or at the minimum of founder Roine Stolt, who seems to have as many side projects as Mike Portnoy! The main question for a band of this calibre is how does the new release compare to their other material?

Well, in a nutshell, it’s pretty damn good. Everything you would expect from musicians with the talent of Roine et al, the usual high standard of song writing,  the technical ability of each member, sumptuous soundscapes, melodies galore, The Flower Kings very rarely disappoint for a reason – their ridiculous level of talent, which is pretty unfair to a lot of their contemporaries who are far from untalented themselves.

I sat listening to this a day after completing our most recent instalment of The Singles Club, which I chose ‘Miracles For America’ for and rightfully so, such is its stunning creation. The rest of the album continues in the same manner as this, the revamped line-up holds to the same standards that Roine has maintained as a standard throughout his career. ‘Vertigo’ and ‘Ascending To The Stars’ also stick out for me, though not by much due to the aforementioned high standard. The choice of ‘Miracles For America’ is probably a just one, as it’s one of the most standalone tracks, but, bar the short introduction track, it could easily be anything else on the album. The overspill on to the second disc comes across as more a can’t leave it out, rather than pad it out, with the tracks all more than capable of holding their own ground, too.

While I can fully understand and respect that prog is certainly not for some, I could see this album maybe making a few people waver in that choice.  The classical aspects abundant in ‘Ascending To The Stars’ should make at the very least that track, if not more, while the softer approach, in the main, mean fans of AOR may well find more than a few pieces to be more than acceptable to them. A sonically stunning release that not only compares favourably to previous releases, but should enhance even futher their discography, sitting as a highly covetable creation on its own, regardless of the previous rich heritage of The Flower Kings.