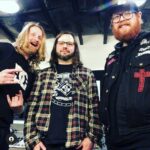 Having lived in the North West for the better part of a decade now, I’m used to hearing the phrase “them bloody kids” being bandied around and generally it’s referring to the hordes of kids that hang around in places like the park or outside McDonalds. What I didn’t expect is for this particular group of bloody “kids” to be a hard-hitting alt-rock/groove metal trio from down London way…

Having been already smitten by their debut album, ‘Radical Animals’, this past week I took the opportunity to hook up (virtually, of course) from my remote ÜR outpost with frontman Seb to have a chat about all things TBK. Among other things, we talked about: