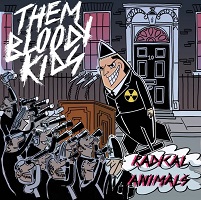 Having lived in the North West for the better part of a decade now, I’m used to hearing the phrase “them bloody kids” being bandied around and generally it’s referring to the hordes of kids that hang around in places like the park or outside McDonalds. What I didn’t expect is for this well-used phrase to be taken on as a band name, and I certainly didn’t expect the resulting band to hail from London! But, hey, stranger things have happened I guess, so let’s take a look at what this politically charged album from Them Bloody Kids has to offer…

‘Radical Animals’ is a pretty accurate description of what this debut release from the London trio has to offer. There’s a distinct mix of punk aesthetic with groovy riffs that are lifted straight out of the doom/stoner scene which is then mixed with a whole bunch of other influences to create this pretty, well, radical album. The vocals are delivered with a hint of aggression with some serious pace to them as well, in fact the vocals remind me of one of my favourite bands to come out of the South East – The Hell. It’s a pretty scathing look at the current state of just about everything but it’s delivered in a manner that is still distinctly British; with some particularly choice lyrics that some of our international brethren may not appreciate quite as much as I did.

Standing out amongst this solid collection of tracks for me has to be ‘Do What You Do’ which covers the ever-relevant topic of depression and the general struggles of just existing when you find yourself stuck in that hole. What particularly grabbed my attention was the first line “As I walk through the concrete jungle, my mind crumbles like a biscuit in a brew” and I thought, you know what, that is possibly the most perfect metaphor for all of us to relate to. This is absolutely ripe with boiled-over frustrations of someone who is just trying to keep carrying on and pick up the pieces of everything that crumbles around them. It’s a pretty strong example of the crossover between punk and groove rock that is laid on real thick throughout ‘Radical Animals’ and has one hell of a catchy main riff that’ll bounce around your head for days (and hopefully your mind is an intact biscuit at the time!).

This is a pretty big debut from Them Bloody Kids and the politically charged nature of it is something that will absolutely go down well at the moment. Let’s face it, everyone is fucking sick and tired of just tolerating shit at the moment, and it’s really starting to shine through in the album releases that are coming through, and that’s exactly what I like to see. Hell, I’m pretty sure I called this as a prediction at the back end of last year when Kunt and the Gang were pushing for Christmas number 1 with their little ditty about BoJo…

The fusion of styles that these guys have committed to record has the potential to appeal to a wide range of people. For those who like their music to be topical and full of aggressive energy, for those who like their music to have groovy licks and catchy choruses, and for those who like to throwback to the nu-metal heyday – there is definitely something to be found for all these groups. And for me? I reckon the ‘Radical Animals’ successfully channels everything that’s shite about the world at the moment and delivers it with sheer aggressive energy so, yeah, I definitely dig this!