It was the winter solstice, and what more appropriate way to spend it than in the company of Icelandic folk metallers Sólstafir? Well, I for one couldn’t think of a better alternative (well, dancing naked in a forest with the temperatures heading towards the lower end of the mercury scale didn’t really tickle my balls – rather, it probably would have frozen them), so off I toddled to my local pub for my penultimate gig of the year… 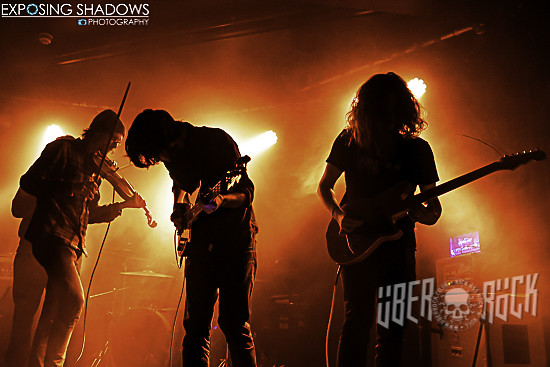 Openers Talons certainly show their musical claws as they take to the stage with a bleak violin mien that builds slowly into a densely hypnotic main riff, which in turn is accompanied by dense winding melodies underpinned by brutally nihilistic rhythms that pump and grind in equal measure.  The songs may be long, but also have a sense of innate urgency that makes them fly by with an ease from which many contempories such as Winterfylleth could earn precious lessons. They finish off with one of the longest songs in their set, the ‘We All Know’ album closer ‘Quiet’, which is somewhat ironic is that, despite clocking in at more than seven minutes, it’s also their heaviest and fastest tune. A solid scene-setter for the rest of the evening. 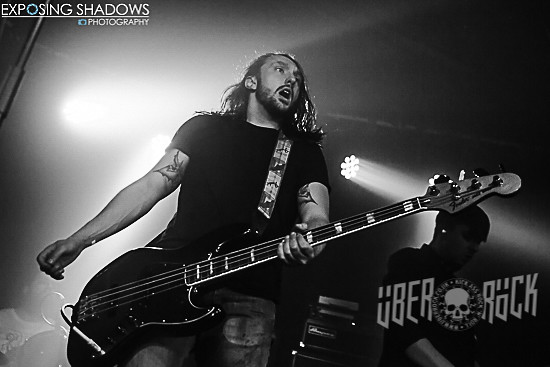 With the doors having opened ridiculously early (to accommodate the inevitable pre-Christmas club night), the place is still filling up as Colchester instrumental quartet Telepathy introduce us to their big, bottom-ended, droning doom.  Their sound is characterized by deep, thumping grooves, which have enough dirt under their fingernails to grow several fields of potatoes, their big, dramatic undertones fleshed out with gargantuan riffs that just reach into the darkest corners of your soul and pull its strings out through your chest with a twisted sneer on their faces. Another powerful set from another powerful young band from who I look forward to hearing more.

The room is about half full as the atmosphere builds to a soundtrack something akin to a cross betwixt old-school Scandi-doom and a Spaghetti western soundtrack; yellow lights pierce through the smoky gloon as the momentum slowly gathers pace. Addi’s vocals don’t kick in until the second song, ’78 Days In The Desert’, adding both a Nephilim-esque gothicism and a vibrant acidity to the dark grooves. The overall sound is so powerful that I swear I can feel the fused discs in the base of my spine vibrating in agonizing ecstasy. 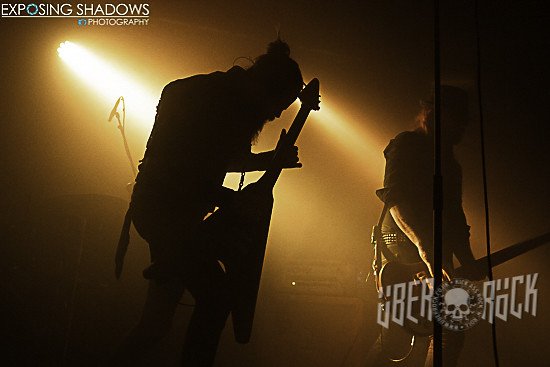 However, despite the initial momentum, things soon start to drag. After about 40 minutes or so there is a feeling of sameness and that the band, on the penultimate night of the tour, have run out of energy and are just going through the motions – as if they are counting down the clock until they can get the last ‘plane home to Reykjavik for the Yuletide celebrations. Or maybe it’s just me – tired of all the bullshit that 2018 has thrown at me and wanting something more positively enlightening on which to end the year.

However, things change again as the set enters what turns out to be its final third, as the band pick up the pace and change the mood, helped by them making a rare foray into the English language, and the finale is absolutely epic, stunning even as they close out what proved to be a curate’s egg of a set – more than enjoyable when it needed to be, but definitely not so when it didn’t.  Still, it definitely was an experience, that’s for sure, aided by two extremely strong support acts.