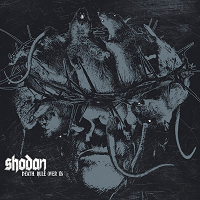 This is brutal! Have you ever had music that had so much energy and gets to you in just the right way that you have a hard time putting into words what you like about it? That is how I feel about this and since I need to write a review this is wildly inconvenient. When the press information is just one paragraph telling me it is melodic death metal and giving me some very basic info, I know that they are confident enough in the product to let it speak for itself. That confidence was well placed. This album is honest. The passion of the band comes through on every track.

The vocals are far and above what I am used to in the genre. There is more power in the scream than I normally expect for melodic death. Frankly, pushing to sound a little more toward the death metal side than the melodic side but that is not a problem at all. It is dark and angry and dripping with passion. With this heavier vocal keeping each track so grounded in the death metal genre when they do open things up and let more melodic elements cut through, they really cut through. This makes for a really nice contrast that I really enjoyed.

Musically the story is pretty much the same. Tracks like ‘Primordial Incest’ have this extremely heavy tone that almost reminds me of the kind of metal we hear in the new Doom game. It has that balls to the wall craziness that you hear there. On the other hand, ‘Doomsday Melody’ has times where it slows way down and cleans up the tone for a softer feel. This range throughout the album makes for a wonderful experience as it keeps things interesting. They also really capitalized on this. Some of the transitions were rather abrupt but not in a bad way. Rather they emphasized the contrast that was being made and gave a rather enjoyable effect with how those transitions were handled.

This is an easy recommendation. The sheer brutal passion in every track makes for an album that feels very thought out and delivers wonderfully on everything I would have wanted from a melodic death metal album. Really my only issue is that I wanted more. If you are a fan of the genre Death, Rule Over Us is very much worth your time. Go pick it up. You won’t regret it.