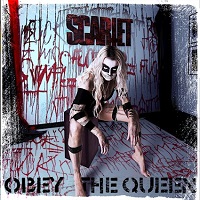 I have very mixed feelings on this one. It is a little hard to explain as it is mostly an emotional response. Some aspects are really good while others feel like they fall flat. I feel like every track was supposed to have this deep meaning but I find I’m just left confused. Especially because the press packet that I was sent states the meaning behind some tracks; but on most of them I don’t see the connection between the stated meaning and what lyrics are actually said. There are these kinda strange creepy elements to some of the tracks that are just weird and I kinda think that was the goal. Once I got there and stopped trying to dig for these deeper meanings, suddenly I was able to find things I liked.

Musically, this album is extremely well put together getting very heavy at times but also knowing when to open up and calm down giving a lot of variety in the tracks especially at times when the lyrics would get a little repetitive for my tastes there was this brutal driving tone that would keep me engaged. When it did soften to let the lyrics cut through more it would transition to a piano or keyboard or something similar rather than the guitars creating a really cool contrast.

As you can probably tell by now my biggest complaint is with the lyrics. The vocal style and delivery are great. Mostly the tracks are delivered in either a heavy shouted tone or a creepy spoken word. There is not really that much traditional singing so I can’t really speak much on range as not too much is shown off. That being said. The style really fits with the music. Lyrically though like I said above, it is a bit repetitive at times and while I feel like there is supposed to be this deeper meaning I just can’t really dig it out. For example, my favorite track was Devil Twins. It is weird and gory but while the whole song is about the fucked up shit these girls are doing, why then states it is all myth and lies at the beginning then set it up that they created this myth by doing all this? It conflicts and is confusing. Once you put that away though it can be a lot of fun.

All in all, I liked the album, but it took me a little to get there. I think a good description would be that this feels like a heavier In This Moment. I think it is a good entry into the genre and I think the next album will probably be fantastic. I think if I were to boil it down the lyrics made just enough sense that I kept trying to dig for deeper meaning but then were just weird enough to forgive that I was not finding a deeper meaning. More time on the lyrics and I think this would have been an absolute hit, but right now I would say it is just 90 per cent there and that last ten per cent might not be as big to many people as it is to me.