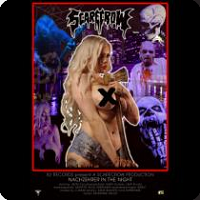 ‘Nachzehrer’ is somewhat odd. Horrorpunk is not a genre that I had ever really thought much about before. The punk influence is very clear, but darker both in the music and in the vocals. There are just so many things going on here. At times it almost seems like there is almost a black metal influence here, especially in the vocals. I think that the most important thing this album could have done was to be fun. So, is it? Yes, it is definitely fun.

As I was saying above. The vocals take on a blackened vibe. They are pretty dark and shouted. Not exactly what I would normally expect from punk. Especially when you bring in the backup vocals; they are a somewhat shrill higher-pitched style that really drives home that darker feeling and also fits what I would expect from a horrorpunk genre. It does bring to mind an almost Halloween feeling.

The music is closer to what you would expect from punk. It has that punk style but with a darker more bass tone. Like the mids and treble are aggressively pulled back to give that darker harsher feel. It is a well-done effect. Normally when you sweep out the mids you lose clarity in the mix, especially with guitars but for the most part, they pull it off well. There were a couple of times where things got a little muddy but for the most part, they handled that darker tone really well.

I think that this one is an acquired taste. The people that this album is for will love it but for many, it might be a little more than they can chew. The darker tones are not the same as what you would expect from other genres that use a similar style, but it also is very different from normal punk as well. Fitting in that middle ground means that I think it is worth giving a shot for fans of either genre to see if it fits your liking for many it should and can even be a bridge between genres. For some, though I am not sure if it will be their cup of tea.