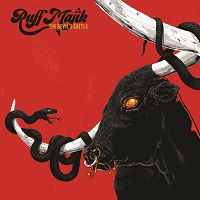 Ah, here we are… our favourite time of year here at ÜRHQ: Halloween (although there are those who would argue that it is Halloween all year ‘round, what with the amount of dragons, skulls and other assorted paraphernalia that adorns the place). And what better way to mark the occasion than with a magical soundtrack that takes its inspiration from ancient Germanic folklore and features tales of vampires, witches, zombies and other assorted beautiful creatures? Can’t think of one? No, neither can we… which is where this third album from South African sludge ‘n’ rollers comes in…

Ploughing a furrow (sic) somewhere between the fuzzed-out psych-infused power pop of Coheed And Cambria, the dense stoner grooves of the likes of Kyuss and the heavy proto-blues of early Clutch, with doses of NOLA-style swampiness thrown in for good measure, ‘The Devil’s Cattle’ is a dense and uncompromising listening experience, sort of like watching ‘The Walking Dead’ done in the style of ‘Breaking Bad’ with Rob Zombie in charge of both directorial and soundtrack duties. Yes, it’s that twisted… and gloriously so.

Musically, there are myriad reference points, in addition to those outlined above. There is dark, cacophonous doom mixed with trippy psychedelia. There is laconicism mixed with moments of pure, unrestrained speed metal fury. There are audio samples that accentuate and aggravate moments of classical Gothicism. There is a sense of dank claustrophobia mixed with that of unbridled, energetic relief. And underlying it all is a sense of precise, morbid intent that crystallizes itself in every note, every syllable, every breath.

‘The Devil’s Cattle’ is one of those albums that is hard to categorize, which in itself makes it a dream of a listen. It’s like having a Halloween party where Seasick Steve is sitting on the stoop, Nick Cave is brewing hooch on the kitchen stove, Jack White is downtuning every guitar in the place and Wino is sitting knowingly in the corner, nodding in appreciation.