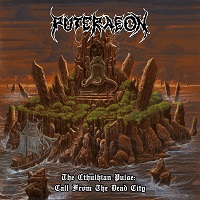 The resurgence of classic death metal over the past 15 years or so has created nostalgia for the older crowd that were there when the first wave hit, as well as broadening the horizons of younger listeners to show how powerful the classics really were (and hopefully getting them more interested in seeking it out). Of course, there are bands that play OSDM that was either a specific sub-genre of death metal or came from a specific scene in a localised region (Florida, Finland, Germany, etc.) – besides the Florida bands, most of which were supremely influential and important to the evolution of the genre, the biggest impact in the early 90’s was Swedish death metal, spearheaded by huge names such as Entombed, Carnage, Grave, Unleashed, and the ever-wonderful Dismember. Of the newer bands looking to play within those boundaries, we have seen some amazing work by Entrails, Black Breath, Revel In Flesh, and Demonical amongst a bevy of others that are slaves to the dank, cavernous buzz of the legends that came before , and that have put their own spin on the style.

Puteraeon emerged from the depths in 2008, releasing the first of three full-length albums in 2011. They chose to focus their overall theme on the chaotic literary world of H.P. Lovecraft and his Cthulhu mythos, and the sound was all HM-2, buzzsaw riffs, and cavernous vocals, as per the vibe laid down by Nihilist all those years ago. Ultimately, their output has been workmanlike, solid without any surprises, and stuck to the formula. Whilst the music is good, it isn’t anything that you couldn’t get from the family of 90’s legends, and thus they have flown well under the radar. With their new record, the mouthful that is “The Cthulhian Pulse: Call From The Dead City”, they have sadly not progressed or pushed the boundaries one iota.

Drawing from various areas of Lovecraft’s Cthulhu cosmos, the lyrics are still a wonder to read and immerse oneself in the murky, ocean-drenched pit – this is one area where the band has always shined, as they interpret his work with a fanaticism second-to-none. The artwork is bona fide Cthulhu-worship in the classic death metal vein, muted colours invoking dread and filled with dark intricacies. And the mixing and mastering was done by none other than the legendary Dan Swanö at the one and only Unisound studio, which is always a monster plus for achieving clarity whilst retaining that ferocious Sunlight Studios claustrophobia and brilliant attack. So where is the problem, you might ask? Unfortunately, it all comes down to composition and song-writing, and the ability to create songs that push emotional buttons.

As a band, Puteraeon are no slouches on their instruments or being able to communicate with each other musically, and everything here is played with precision and passion (as it should). The riffs and melodies are keen and evoke the necessary Cthulhu dread, but they are all highly reminiscent from the history of Swedish death metal – these are not outright stolen from the Entombed/Dismember songbook, but they merge into one another to the point that there is no clear ‘Puteraeon sound’ of their own. Even after repeated listens, there are very few standout parts that will sit in the aural psyche, and thus the album plays (however brutally and with consistent might) through without making any impact whatsoever. That said, when the band hit their stride, mostly in the faster, more vibrant moments as seen in songs like “The Curse”, “Permeation” or “Call Of R’lyeh”, they do kick vast amounts of ass, but this is lost amongst the collection as a whole. The slower, more dirge-like moments, where the guys dig deep into the Lovecraft shadows, tend to drag more than build tension, and unfortunately this is where both Swedish death metal and Lovecraft make their true mark. If the melodies and creeping uneasiness were treated with more of a personal touch, the mid-paced passages would create a brilliant foil to the blasting OSDM, and ultimately make for the sound we are all looking for.

Puteraeon are not without talent or musical chops, but they fall short in the entertainment department and, with so many other bands bringing sumptuous dishes to the table, they need to look at their strengths and build on them instead of relying on the bare basics of the genre. “The Cthulhian Pulse: Call From The Dead City” will most probably excite those that have never dipped their toes in the Swedish ocean, but for those of us that are already well-versed in ‘that sound’, there is sadly little here to make much of an impact. Here’s hoping that the band can swing things around on the next release and bring them to the level that they deserve.