October Falls – ‘A Fall Of An Epoch’ (Purity Through Fire) 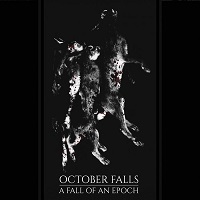 ‘A Fall Of An Epoch’ presses many of the buttons that I like for an album. It is dark and angry with long tracks that have a lot of evolution to them. It is no secret that I love it when an album tells a story, especially through the music. I mention in most of my reviews how much I love it when a track or album evolves over time. It really draws you in and makes you think about what you are hearing. This makes the experience intellectually engaging rather than just emotionally. I realize that is a quite abstract statement, but it is probably the best I have, as it is an abstract concept. It is just flat out good.

The music makes these wonderful transitions between the traditional black metal style we expect into these soft and beautiful sections that, while very different in style, come together perfectly and flow between each style freely. It is probably one of my favourite effects in metal. That contrast and that evolution over a track make things so interesting. Especially with how long these tracks are it just really adds to the experience and really holds your attention well while also still being very approachable, at least for black metal. You would be hard-pressed to be disappointed.

Complementing the music is a very distorted tone of voice that really completes the music. I would not say that the vocal style conveys a dark or aggressive tone as we hear so often in black metal. I would say the vocal style carries more of a pained or sad tone. It completes the stage set by the music and manages to hold your attention that the music captured in the first place. I would say that the vocals are treated almost like another instrument rather than the made show like in other genres. They are a part of the experience not the driver of it. It is a perfect balance and I really appreciated it.

‘A Fall Of An Epoch’ is an experience worth having. There is little here that I don’t love and nothing that I don’t like. For fans of the genre, this is a must-listen in my book and even for people who are just curious about the genre but have not dived in yet, I think this is as good a place as any. It is a beautiful experience that I think you will love too.