FESTIVAL NEWS: None more black – Damnation Festival to bring the Mayhem to Leeds

This year’s release of the ‘Lords of Chaos’ has certainly stoked some mainstream interest in the story of black metal progenitors Mayhem, so it’s not surprising to see the legendary Norwegian group striking while the iron is hot and returning to the UK for a performance at this year’s Damnation Festival. Following a headline set at the sold-out Incineration Festival in London, Mayhem will be making the trek up to the north this November to join the likes of Opeth, Lord Lost and Venom Prison.

Mayhem aren’t the only legendary black metal alumni to be joining Damnation though – the festival will also see the UK debut of Gaahls Wyrd, the new project by ex-Gorgoroth Gaahl. Not content to let all the satanic iconography fall to one subgenre, Damnation has also added synthwave hero Gost and some devilishly good licks in heavy rock revivalists The Vintage Caravan. Wanting something heavier? Damnation has you covered – US extreme sludge metal masters Inter Arma join the line-up in a Damnation debut, alongside Belgian death metallers Carnation.

Already boasting an incredibly diverse mix of metal subgenres and style, Damnation 2019 is shaping up to be a flagship year for the festival, promising the very best of the genre both past and present.

Damnation Festival will be held at Leeds University on 2 November, and tickets are available now. 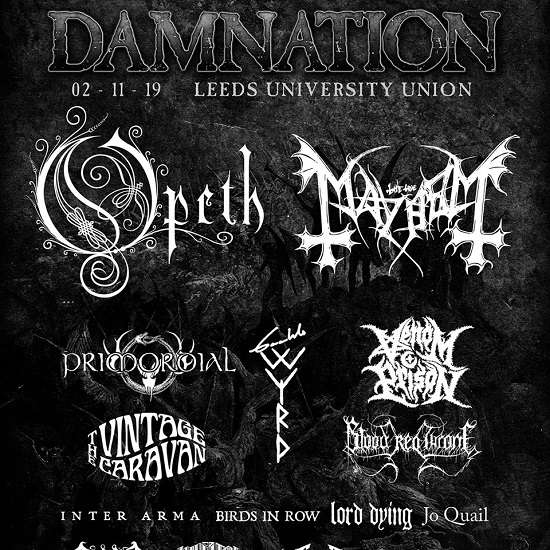