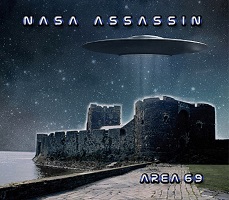 The ‘official’ historical records claim that Carrickfergus Castle – an imposing edifice on the northern shore of Belfast Lough – was built by the Norman conqueror John DeCourcy on a rock known for the healing powers of its fresh spring (and also its badass location)… however, the locals – and those of us you used to live there – know better!

The legend goes that the rock upon which the castle stands (the town was originally named after the Dalriadan king Fergus Mór mac Eirc, who claimed that aforesaid spring had cured his leprosy) is actually a protective cloak for an alien spacecraft which crashlanded there millennia agom, and that one day its owners would return to reclaim it! Well, fast forward to 2014 and enter five mysterious figures collectively known as the Assassins: led by a mysterious white-coated, mad-eyed character known only as ‘The Watcher’, with the rest dressed all in black and bearing the enigmatic code ‘NASA’ emblazoned on their arms, lore stipulates that they are using music as a force by which to re-energise their craft and thus return to whence they came…

‘Area 69’, the resulting debut album from this band of warriors (known for their electric and, quite frankly, in-fucking-sane live shows), is an eclectic mix of space rock, punk, prog and classic metal (and even grunge!) – all washed down with healthy doses of gin and Buckfast (although they, like we, probably wouldn’t recommend indulging in both of these last two ingredients at the same time!).

‘NASA Assassin’ opens the album by amalgamating all of the aforesaid elements into one five-minute package – an acidic psychedelic trip around the outer reaches of the universe with a riff as solid as the volcanic dyke the above mentioned castle is allegedly built on and a vocal that veers from rap to punkishness – The Watcher’s often vocal style is a central tenet of the band’s overall style. ‘Not Givin’ Up Livin’ (To Live)’ and later ‘One Man Crime Wave’ are punkier, in the mien of Norn Iron’s classic punk acts (well, bassist Aidy also plays in The Defects, and his rhythm work throughout the album does have that familiar dirty thrump that all acts in the genre should possess), while embedded in a sense of glorious absurdity (the latter track quotes the line “if you go down to the woods today you better go in disguise”…) which weaves its way through every aspect of the album, from the often inanely insensible lyrics to the demented mixing of musical styles (both points are ably highly by the madcap ‘Twitch In The Kitchen’ which even manages to bring elements of reggae into the already diverse amalgam of styles).

It’s a weird album, like its progenitors, and it’s an eclectic one – perhaps a bit too experimental for many people. But, if rock ‘n’ roll stuck to the framework, then it would quickly become very boring, and we’d all be listening to Nickel-freakin’-back all the feckin’ time. No, it’s all about living on the edge – be it the edge of the universe or that of a three-legged stool while you try to extricate yourself from the ennui of ‘normal’ life… rock ‘n’ roll is supposed to be abnormal, and that’s a concept that NASA Assassin fully embrace. So, please don’t beam me up, Scotty: I’m having too much of a good time losing my mind down here with the Assassins… now, where did I put that half of Gordon’s and Buckie?