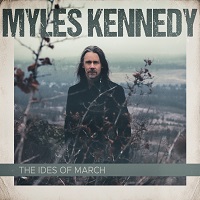 It’s not possible to place Myles Kennedy in the genre of musicians who rest on their laurels.  Since being in the Mayfield Four and getting noticed by Slash for his work with the Conspirators, he has consistently been involved in a multiplicity of musical projects as a singer and guitarist.  Whilst predominantly associated with the fabulous Alter Bridge, his main talent has been his tremendous vocal ability.  However, this is backed up by a seriously talented songwriter and guitarist.  Consistently turning out sublimely crafted songs in partnership with Mark Tremonti for AB he is also a very accomplished guitarist albeit not regularly associated with lead guitar with that band, but then so is Tremonti a very good vocalist who is more renowned for his solo guitar than his singing.

The appropriately titled ‘The Ides of March’ was crafted by Kennedy as his second solo offering whilst the world went to hell in a handcart on the back of the Covid19 pandemic.  I have been a fan of both MK and AB for several years now and have seen both perform live on many occasions.  I was very happy that Myles was on the stage at Steelhouse in 2018 – the guys from AB must love Wales to play on top of a mountain in the pouring rain.

If you are expecting soft vocals and easy on the ear acoustic guitar, forget it. From the opening slide guitar solo of ‘Get Along’ it is much louder and, given this is only recorded by Kennedy and his two protagonists from ‘Year of the Tiger’ (Zia Uddin and Tom Tournier), you’d wonder how many are actually performing on the album.  It appears that ‘Get Along‘ is a criticism of the division within American society (and society in general). Then there is the solo at the breakdown – woah! Follow that with ‘A Thousand Words’, that is similar to some of AB’s songs with catchy hook and a tremendous guitar solo and reflective lyric against the issues going on in the world.

A much more southern bluesy slide guitar opening to ‘In Stride’ continues with the clever lyrical writing of Kennedy and is accompanied by his usual lyrical range and style.

After such a blistering start to the album the acoustic guitar and whispered opening to the title track takes it down a little and reflects the mood of some people at the start of the world pandemic at the start of March 2020.   It also provides a nice counterpoint to the start of the album and gives an historical perspective that reflects the feel of the Roman Empire and its demise: no one knew a year ago what was happening to mankind in the face of the virus; however, the last verse provides a positive outlook even at the time.

If that wasn’t enough, ‘Wake Me When It’s Over’ reflects a different attitude: “it’s a shitstorm so they say” being almost the opening lyric and another viewpoint.  Another acoustic guitar opening carries the majority of ‘Love Rain Down’ before the additional instrumentation kicks in and fills the sound of the track, with Kennedy again writing “for the promise that some day I can be home”.  This provides hope for loved ones separated by lockdowns and isolation, again reaching into the feeling of many the way clever songwriting can.

Slide guitar seems to be his favourite instrument on the upbeat ‘Tell It Like It Is’, another real toe tapper of a song.  More of a country/southern rock ballad feel is obvious in ‘Moonshot’: “over and over again we took so much for granted” links to the mood of many, I’m sure. A quick return to the style of ‘Year of the Tiger’ provides the uplift that the mood requires in ‘Wanderlust’ – everyone wants to be free to travel and see their loved ones and this track provides the ability to do it.

The final track goes back to a slower, dirty delta blues style: the line “things will be better in due time” opens ‘Worried Mind’, emphasizing the feeling that this whole album appears to be a very pensive lyrical construction by Kennedy – which has always been a strength of the AB song writing as far as I am concerned. It is not a concept album and neither does it proclaim to be, but it is an album of its time and located in a significant period of human history.

Blues rock drives the majority of the album, which carries on in this style – loud, well written and extremely well performed, but with the usual pensive moments to give the listener time to take stock.  This is much more electrically driven than ‘Year of the Tiger’ and as a result it gives Myles the opportunity to let many people see how good an instrumentalist and songwriter he really is to deliver on the mood and feeling of the time he is writing in.

This is another outstanding delivery from Mr Kennedy. I love it.