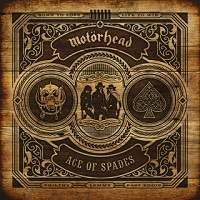 In the entire annals of hard rock and heavy metal, there are but a handful of albums which truly deserve the description “iconic”. One of them, most undoubtedly, is ‘Ace Of Spades’. As the press release which accompanies this massive, and equally deservedly so, box set treatment to mark it’s 40th anniversary states, ‘Ace Of Spades’ was nothing short of a gamechanger for all forms of hard rock. Like lightning in a bottle, it perfectly captured everything great about hard rock, heavy metal, and punk at the time, amped it all up to 11, and came racing out of the gates at what felt like a million miles an hour, pushing at every musical boundary. Just like its three creators, nothing was harder, nothing was faster – and certainly nothing was louder than Motörhead and the hand they dealt with this opus magnus, which still stands the test of time to this very day as one of THE defining moments in not just the history of heavy metal but that of rock ‘n’ roll as a whole…

To be honest, there’s not much more that can be said about this deluxe boxset that hasn’t already been said about the album itself – apart from to say that it is an absolutely monstrous feast for both the aural and visual senses. If you don’t believe me, just check out what it includes:

The remaster of the album itself is beautiful and sumptuous – well, as beautiful and sumptuous as a Motörhead album can possibly be, drawing out every nuance of the sound, while retaining the energy, the fun and the sheer power of the original work, But, it is one of the “bonus” live albums that really sparked our attention here at ÜRHQ: branded as ‘Riders Wearing Black’, it is the previously unreleased mixing desk recording of the final night of the ‘Ace Up Your Sleeve’ tour, right here in our home town of Belfast, just two days before Christmas 1981 and on the eve of Lemmy’s own 36th birthday! And, by all accounts (at 15, my parents said I was too young to attend, and by the time they changed their minds it was sold out) what a party it was! By the time the tour reached its culmination, Lemmy had decided to “retire” the Bomber lighting rig, and so this was it#s last “official” outing: which makes it a shame that the BBC had decided to film the band’s previous Belfast show eight months earlier!

The ‘Ace On Your Screens’ DVD features some classic, and some hysterical moments, from the opening clip of the band totally obliterating a kids’ TV programme through footage of a girl eating grapes while the trio blast out ‘Ace Of Spades’ itself on a Euro version of ‘Top Of The Pops’ to Phil Taylor’s incisive comments on the difference between heavy metal in the ÜK and and ÜS (“maybe it’s the weather…”)… and, yes, that classic ‘Tiswas’ closing sequence is in there! There is also one very serious insert, capturing a legendary moment in Motörhead history, in the original raw interview footage of ‘Philthy’ being interviewed in his hospital bed by none other than Gloria Hunniford in the wake of breaking his neck during a post-gig roustabout just over a year before the show included in this set…

There is only one question which remains to be asked about this majestic release: are you a Motörhead fan? If the answer is yes, then this is an essential purchase, demonstrating as it does the band at the height of the powers.  If your answer is no – well, that’s an irrelevance, really… Oh, sorry, one more personal question: where’s my Christmas list?