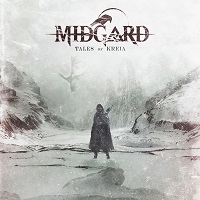 I have to admit that, when this album submission first landed in the ÜRHQ inbox, I viewed it as something of an anomaly. A folk metal band from Ukraine who take their monicker from the ancient Norse name for the world of man (that’s Middle Earth to all you heathen Tolkienites), and a concept album about a rebellious Jedi knight… It didn’t seem to make any sense. But, then, slowly, it did…

The Viking reference I could fully understand, as Ukraine stood at the epicentre of the Kievan Rus federation of apparently disparate but conjoined states that controlled the trade routes between Scandinavia and the rich plunders of the Middle and Far East in the latter half of the first millennium and the early years of the second…  And given the place that the Star Wars franchise has established in modern folk mythos, it is hardly surprising that someone would seek to combine the two, at least in a musical concept – which is exactly what Midgard have done on this, their third full-length album.

Walking a tightrope somewhere between the berserker death metal leanings of Amon Amarth and the more traditional folk metal leanings of the likes of Eluveitie and Korpiklaani, Midgard transport our heroine back to the lore from which they themselves take their name, intertwining traditional folk heroes, and anti-heroes, such as dwarves, elves and all sorts of other spirits and entities into their confusing and confounding tale, which is not helped by the fact that, although I understand the underlying thematic references, they sing in their native Slavic language: not that that is meant as a detrimental criticism, it’s just that the language barrier, on this occasion, does not aid comprehension.

So, we’ll turn our attention to the music, shall we? And, it has to be said that ‘Tales Of Kreia’ is quite an impressive offering, and one which is a worthy addition to the folk metal canon. It certainly touches all the bases in terms of integrating folk themes and miens into the modern metal genre, and it does have plenty of cheeky references to things like drinking and fighting, with which we can all identify. It does have its faults, such as in the way they attempt to inject moments of folky joviality into the middle of a serious DM riff, but overall it’s an enjoyable listen and one which definitely will appeal to fans of the quirkier end of the folk metal spectrum.