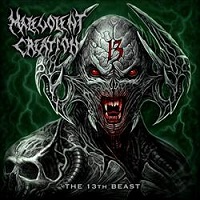 Sometimes all you really want is angry music. Maybe your boss was a dick, or you got repeatedly cut up on the drive home, but there are days when it’s case of either blast pulverising death metal at full volume or destroy everything you come into contact with. Step forward ‘The 13 Beast.’

The latest effort from old school veterans Malevolent Creation is exactly what you need to stop you swinging a sledgehammer through the living room wall in a fit of rage. It’s an utterly monstrous album and the perfect outlet for releasing aggression. It doesn’t believe in slowing down, there’s no hooks or catchy choruses and not even the briefest concession to the genre’s commercial flirtations. This is death metal at its ugliest and most uninviting, Amon Amarth and Arch Enemy this is not.

It’s also the first album since the death of beloved original vocalist Brett Hoffmann. New boy Lee Wollenschlaeger has big shoes to fills but man, he does it with aplomb. He’s so gruff we’re not entirely convinced he’s human, noises like this should only be made by Demons or shaved bears. If ever there were an exact halfway point between George ‘Corpsegrinder’ Fischer and Kataklysm’s Maurizio Iacono, it’s him. Every single lyric on the likes of ‘Mandatory Torture’ and ‘Agony For The Chosen’ sounds like it’s being vomited up while on fire.

Guitarist and sole remaining original member Phil Fasciana keeps the riffs coming, along with some short but invigorating solos but the real stars are arguably Josh Gibbs and Phil Cancilla. Manning the bass and drums respectively, the two-man rhythm section ensure that this is a record with a metric fuck ton of bottom end. It’s so heavy you could use it to hammer sections of railway line into place and Cancilla plays so fast, he must be packing a cybernetic enhancement or two.

On the downside, the sheer lack of variation in ‘The 13th Beast’ does make it a challenge to listen to its entire fifty-minute run time. It does neck-breaking hyper-violence but nothing else and you’ll be worn out long before the band are. One or two songs outstay their welcome too, with the overlong ‘Born Of Pain’ being an especially significant offender.

For a sheer adrenaline rush though, ‘The 13th Beast’ does the job admirably. This is not an album for fair-weather metal fans, you’ve got to be right down in the deepest part of the rabbit hole to enjoy this. Malevolent Creation don’t give a fuck about originality but if you’re in the mood for raw, knuckle-headed brutality, ‘The 13th Beast’ slays.