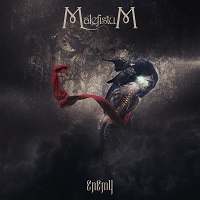 MalefistuM is a new project put together by guitarist Jens Faber, perhaps better known as the driving force behind German power metallers Dawn Of Destiny, with whom he has released seven albums without managing to break into the upper echelons of the genre’s wannabe elite. This new project sees him walk a slightly different path, with an emphasis much more on the DM end of the spectrum, thanks largely to the involvement of vocalist Melissa Bonny, who is one of those female vocalists with the rare ability to switch between purgatorial death growls and high-flown operatics quicker than most of us can neck a shot of Buckie…

Faber’s power metal background is immediately recognisable in the album’s Egyptian-themed intro, which features a beautifully haunting refrain from Bonny, that in turn belies the sheer ferocity of what is to come, as opener and lead single ‘Towards The Sun’ accelerates out of the blocks proper, its huge symphonic sound quickly developing into the sorts of sweeps and curves which the rest of the album delivers as it dances between soaring symphonics and beatific brutality.

Where ‘Enemy’ truly scores is in the apparent ease of its connectivity. Where the death metal beatdowns could overpower the subtle symphonics, and vice versa the more majestic moments of the latter drown out the former’s more melodic touches, they instead collaborate like long-time allies with an almost psychic connection between one another. There is a homogeneity which could otherwise be lacking in the hands of a less deft craftsman. The layers are expertly and thoughtfully developed, atmospherics elaborated in way which does not distract, or detract, from the power of the underlying performances, while moments of beauty peek and peer through the dense dynamics of the orchestrations.

‘Enemy’ is a majestic album, filled with majestic performances, not least by Bonny, who one moment can grab you by the balls and the next send shivers sheering up and down your spine – and also do both simultaneously. Guest appearances by the likes of Eric Dow, Federica Lanna – who takes the totally stunning power ballad ‘Adore Me’ into the stratosphere – and Zagan add to the overall impact with their well-selected interjections adding valuable additional layers exactly where needed. Each of the 11 songs is stunningly crafted and developed, thoughtful without being over-thought, eloquent without being verbose, elegant without being bombastic. It comfortably straddles the death metal and symphonic metal genres, standing like a golden bridge between the two in a way which adepts of both miens with admire, and hopefully adore in equal measure. A stunning work.