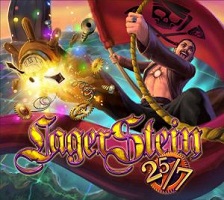 Alestorm once said “you may think you’ve heard this music before, that Running Wild did it back in ’84.” And they were right, the concept of pirate metal is nothing new, but that hasn’t stopped a growing obsession with this genre over the last decade or so. And is it any surprise? In a world that is full of news of misery and disaster, those sub-genres of metal that focus on comedy and just plain fun are absolutely flourishing. And you know what? I’m all for it!

Lagerstein are billed as Australia’s premier pirate metal outfit, which I guess begs the question of how many pirate metal bands are there in Australia? (If anyone knows, please let me know.) Since 2010 the crew of Captain Gregarrgh have been introducing crowds to their glass duck rum decanter, and the lost art of drinking out of a shoe! Starting from humble beginnings, the band just set out to have fun, in fact Violinist Mother Junkst says “Originally we simply wanted to play in a band where we’d have beer bongs on stage.”

It’s this sense of fun that has made Lagerstein successful to date, securing slots at both Sabaton Open Air and Wacken this year and setting sail on a UK tour in September with Manchester’s finest comedy metal export, Footprints in the Custard. The question is, have the guys managed to distil the essence of fun from their live shows into this latest album, ‘25/7’? And can it live up to their cover of Eddie Murphy’s ‘Party All The Time’ from last year?

The album largely follows the crew on their quest to the west to find an extra hour for the day so that everyone can party 25 hours a night, a very bold quest indeed! The album throws up some fantastic ideas, from partying with a drunken parrot, copious amounts of rum, and of course that live favourite – drinking from a shoe. There’s even a very stereotypical cover thrown in at the end for good measure, but I’ll get to that in a bit…

Musically it seems that the band has taken a bit of a ska influence for some of the songs here, there’s the unexpected inclusion of brass that crops up. There are also a couple of interesting styles in there that I wouldn’t necessarily expect from a Pirate Metal band! There’s some great jiggy numbers though, which I’m sure it’s what most people will be buying this album for.

‘Dig Bury Drink’ is exactly what you would expect from this album. The song opens with an accordion solo before bringing in the violins and a very folk-metal drum rhythm. I notice that Captain Gregarrgh’s vocals seem to be cleaner than on previous albums, there’s now less of a Pirate growl. In fact, everything seems cleaner on this track and perhaps that’s a sign of maturing sound but I kinda miss the subtle rawness of their previous album.

For anyone who’s been to a Lagerstein show will no doubt remember watching them scull beers out of their own shoes which brings me nicely to the first single from this album, ‘Shoey Shoey.’ This has all the makings of a solid live track, although I dread to think how many crowd members will drink out of their own shoes to this song… This is a great bouncing tune, with all the piratical elements we’ve come to expect.

Next up is ‘Drink of the Pirates’, in which the guys answer one of my most pondered questions, ‘Can rum really save lives?’ To which the answer is apparently ‘Of course, rum can do anything!’

This track is incredibly catchy, with a simple rhythm and progression that will be almost guaranteed to get stuck in your head!

Now I mentioned the unexpected earlier, and I think ‘Pina Colada Paradise’ perfectly embodies that. This is a strange love song to that cocktail you only ever buy when you’re feeling a little fruity. It’s a strange male/female duet with lots of steel drums and reggae guitar riffs that is certainly a deviation from the usual Lagerstein formula. I can see this one being pretty divisive among the loyal Lagerstein crew.

And now let’s talk about that cover. Could there be anything more stereotypically Australian then a cover of Men at Work’s classic ‘Down Under’? Once you’ve sat through the calming Ocean sounds of the penultimate track ‘A New Day’ the instantly recognisable drum (well, I guess it’s jars really) intro kicks in to signal the start of this classic. There’s plenty more brass involved in this cover, and of course some clever word smithing to make it a little more pirate. It does sound more like a ska cover with added accordion, but that’s fine by me!

If you’re not bored of the pirate metal phenomenon yet, then this will make an ideal addition to your collection; but, be warned that there is at least one track that may not be too everyone’s taste. I’d personally say it’s worth picking up for the humour alone, although it is very clean sounding in comparison with earlier albums, and whether that’s a good thing is down to personal taste!

They may be clean on the album, but let’s see how they sound on the UK tour in September when everyone is drinking along…