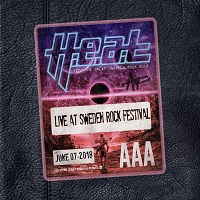 Regular ÜR readers will know that, like several of my colleagues, I am not the biggest fan of live albums. This is due to a number of factors, not least the question of how “live” they really are, or how much studio trickery has been employed afterwards to paper over the cracks in the performance(s) concerned and correct any mistakes. Often, they also come across as staid, failing to capture the true energy of the band in question when they are on stage in front of a rabid crowd of diehard fans. Doing this with an act as dynamic and energetic as H.E.A.T would be a titanic feat for the engineers tasked with doing so – but this package manages to so, and then some.

‘Live At Sweden Rock’ is the raw encapsulation of everything you expect from a H.E.A.T live show – and I should know, as I’ve seen them several times over the past decade and always come away with a massive smile on my face, my throat ragged raw and my dancing shoes worn through to my holey socks!

Recorded towards the end of the touring cycle for what many regard as the band’s best album to date, 2017’s ‘Into The Great Unknown’, it is no surprise that they kick things into top gear with the lead single from that opus, the catchier-than-Ebola ‘Bastard Of Society’ which immediately sets the dial on the party-ometer at 11. It’s obvious that the band are on top form, with the ever-charismatic Erik Gronwall very much leading from the front, urging both his bandmates and the massive audience to give it, and them, their all. And both react accordingly, with the other four musicians tighter than a welded nut, delivering huge majestic stabs of melodic rock that ranks among the best exemplars of the genre with aplomb and genuine enthusiasm: you can just visualize the giant grins on their faces (unfortunately, this review is based solely on the audio version).

Of course, as it’s a festival set, there are the obligatory “big pops”, and the biggest of them come midset, with the back-to-back duopoly of ‘Beg Beg Beg’ – complete with an acknowledgement of their rock ‘n’ roll heritage with a clever mid-song segue into a cheeky slice of ‘Whole Lotta Rosie’ and the interjection of Joplin’s ‘Take Another Piece Of My Heart’ at the end – and ‘Tearing Down The Walls’, the latter of which really gives the crowd a chance to exercise their own voices with a massive singalong, which is just about picked up by the mics. The feat is repeated at the end of the album, with the double punch of ‘Living On The Run’ and ‘A Shot At Redemption’ which leave you both gasping for air and begging (or should that be beg-beg-begging) for more: the solution is simples… just press that “repeat” button and wallow in the whole glorious experience all over again!