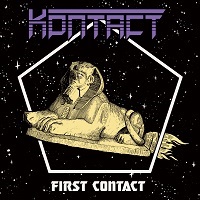 Hailing from the wilds of the Alberta plains, Canadian new wave of thrash metallers Kontact quote Eighties-period Judas Priest as one of their major musical tropes, alongside fellow countrymen, and likeminded sci-fi enthusiasts VoiVod. If anything, however, their sound harkens back even further, reminding more of the psychedelia-tinged ‘Sad Wings…’ era Priest than their punchier later period, coupled with classic doom, space rock and stoner tinges which root the retro sound of this debut five-track mini-album more in the Seventies than in later eras.

Having said that, Kontact certainly do get around the musical block. While opener ‘Ancient Malice’ very heavily references early Priest, ‘The Devil In Irons’ plunges even deeper in the psych-rock canon, evincing the likes of Iron Butterfly and Vanilla Fudge amidst heavy references to later exponents such as Doom and even nascent BÖC.

Lead single ‘Heaven’s Gate’ does possess a very NWoBHM feel, albeit with the massive psyched out fuzz overtones which dominate the album’s overall sound: think Lemmy revisiting his Hawkwind period and you’re somewhere close. ‘City Of The Pyramid’ reminds of two of the godfathers of shock schtick, in Alice Cooper and Arthur Brown, the former reference more prominent in chorus vocal and anarchic song structure.

Closer ‘Fieldz In Sunshine’ sees them adding a more sub-thrash mix to their previous NWoBHM adventures, melding in Mustaine-style vocals and riffage into an amalgam of classic references, from Diamond Head to Venom and doing so with narry a care as to what we think of the outcome…

But what do we at ÜR think? Well, to be honest, there were moments where I went “meh”! And there were others where I went, “mmm, that’s a decent riff…”. The overall judgement, therefore, is that this is a decent debut from a band obviously in the very early stages of their development. They have a lot of work to do, and I wish them well in their endeavours. And, if that sounds like a cop-out, then it probably is, because I can’t think of much else to say…