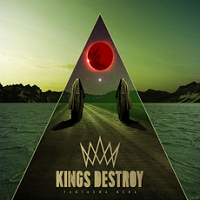 Hailing from Brooklyn and described as an ‘atmospheric grunge doom unit’, without hearing a note you’ll likely already have the idea of Kings Destroy as a band who owe much allegiance to the likes of A Pale Horse Named Death and Life Of Agony. In many ways, you’d be right. Fantasma Nera does evoke the doom-grunge adjacency of APHND, and the soulful alt rock inclinations of Life of Agony, but the band also seem to owe a fair deal to riff-happy radio rock and the textual layering of the stoner scene, the band utilising a variety of tones and styles to create a cohesive sonic collage.

Not as inclined towards doom as APHND nor hardcore as LoA, Kings Destroy instead feel like sonic cousins of contemporary Alice in Chains, their moody guitar-slinging evoking flashes of Jerry Cantrell. Plodding riffs and fist-pumping choruses provide the framework to each song on ‘Fantasma Nera’, the end result coming off almost as the missing link between the likes of Bad Company and Alice in Chains. This is particularly prevalent on the title-track, whose guitar tones evoke the textual richness of Bad Company’s debut whilst sacrificing none of the big-chorus sensibility that has come to typify AiC, resulting in a track with bluesy overtones and a rich, hard rock sheen.

This might make it seem like Kings Destroy are derivative of their forebears like so many other retro-revival acts before them, the truth is that the band’s odd mix of styles and tones ensures they stand apart from their contemporaries. Indeed, where the likes of Temperance Movement, Rival Sons or even Greta Van Fleet will doggedly pursue one or two ideas as far as they can possibly go, Kings Destroy are constantly throwing twists and turns into their sound to make sure it doesn’t ever get stale. That’s how you end up with the driving, almost Manic Street Preachers esque ‘Barbarossa’ rubbing shoulders with the almost Trouble-flavoured ‘Unmake It’, or Sabbath-like ‘Dead Before’, the whole record evoking bands of the past whilst not entirely aping any single act.

As the record progresses, so too do the doomier inclinations of Kings Destroy, steadily building an arsenal of fuzzy riffs and sombre tones to the point where by the end of the record you could almost believe you’d stumbled on a long-lost 70s or 80s proto-doom band. Time displacement vibes come strong for Kings Destroy, the band carrying the history of rock music whilst infusing their own style into the mix to make sure that we get something evocative of the past but not entirely beholden to it.

For all of its stylistic changes, ‘Fantasma Nera’ never really strays too far from the boundaries it sets on ‘The Nightbird’, even with its unique sense of stylistic fluidity. A large part of it seems to come from the record’s production which tends towards over-glossing a little too much. While individual performances pop up with crystal clarity, some of the soulful delivery and flair is lost in translation, not entirely unlike the situation faced by bands like Motorhead, Thin Lizzy or ACDC in the past, feeling like it needs to be roughed up a bit to really communicate the vitality of the band. That’s not to say it sounds bad however – the songs nonetheless possess that timeless sing-and-strum-along feel –  but, ultimately, ‘Fantasma Nera’ comes across as an aperitif for a band who could very well be a hundred times more potent and nourishing in a rawer, less sanitised environment.

In a world where bands like Greta Van Fleet, Rival Sons and The Temperance Movement are all considered the bright shining hopes of rock music, where reinventing the old is seen as a major power play, a band whose scope stretches across various different styles can be hard to come by. Kings Destroy offer those elements missing in the aforementioned bands whilst still delivering the nostalgia, albeit in a way which feels decidedly less cynical and much more in tune with its own musical vision.