It Bites – ‘Map Of The Past’/’The Tall Ships’ (InsideOut Music) 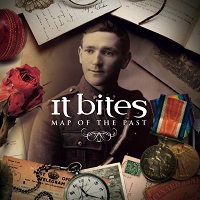 There appears to be a penchant among musicians to do one of two things as a result of the lockdowns – write new music or play with their old stuff.  The latter appears to be the case with the prog/fusion band of the 80s, It Bites. However, rather than just do one album, they have remixed/remastered the concept album ‘Map of the Past’ (2012) and their album from 2008 ‘The Tall Ships’.  I suppose that whilst the musical content is already known to the band’s following, the fact that re-issues are accompanied by a significant amount of extra booklets than were originally supplied and there is the ability to obtain them on vinyl for the first time will help capture the new interest in this media among a different generation.

Many people who were around in the 80s remember the hit song ‘Calling All The Heroes’, so that’s a start on the stylistic intent of the band in releasing these albums to reach a new audience.

‘Map Of The Past’ takes you on a reflective journey through the personal and family history of the band which could well resonate with many after the past year of loss and suffering of many of the people during the pandemic.  ‘Wallflower’ has a section within it that reminds me of Peter Gabriel’s story telling work with Genesis and as a solo artist.

The technical ability of the band remains, and the stylistic intent of a prog fusion band remains as it has always been.  Being a bit of an older prog fan, I hadn’t considered It Bites and ‘Calling All The Heroes’ as being in that genre, but listening to both of these albums it is readily audible to an old set of ears that they are-just goes to show how a hit single can help to create impressions that last.

There is no doubt about the prog influences as ‘Map Of The Past’ plays through the tracks with ‘The Meadow And The Stream’ giving me the definitive Peter Gabriel/Genesis feel from ‘The Lamb Lies Down on Broadway’ period with keyboards and vocals harmonising and playing off each other very well whilst the rhythm guitar is very much in the Genesis/Mike Rutherford style of the period.

The original album had 11 tracks this release includes two bonus tracks, ‘Lighthouse’ and ‘Come On’.

‘The Tall Ships’ was the first new music to feature John Mitchell on guitars and vocals when it was originally released in 2008.  He has obviously established himself since this time and from these two offerings it can easily be seen why.  His vocal range and style suit prog well, as does his guitar playing.  There is not one bad track on either of the albums-and I don’t say that very often.

The narrative within the lyrics just carries you through each song like a joyous warm wave of a crystal blue ocean, at points punctuated by staccato repetitive phrases like the opening on ‘Oh My God’ from ‘The Tall Ships’.  There is so much to like in these albums, they could be one of those that you don’t skip a track on.  These are the first albums for a while that have maintained my attention throughout and had me sit and listen to in one session, albeit on a wet Saturday afternoon. This was two hour 15-plus minutes that I have thoroughly enjoyed.

Listening to ‘Great Disaster’, it could just be the single that breaks the band to a new fanbase and gets more radio play then they’ve had for a while as a single release because of the fusion style.  The other tracks also compare to the later more commercial Genesis stuff from ‘Calling All Stations’, especially ‘Fahrenheit’ and ‘For Safe Keeping’ with a fantastic guitar solo at the breakdown.

The longest track is ‘This is England’ at 13 minutes plus, and I’m sure this will resonate with many at this point (as will many of the other tracks on the two albums).

It looks like this old fogey has found some new music to listen to and enjoy (even if it is re-released).  Gives me the opportunity to see another band if they ever decide to tour. I notice from the Facebook page that the band have taken somewhat of a touring hiatus-even before the pandemic. I really hope this will be seriously reconsidered based on this evidence – I’ll be there if they get out of Cumbria and come to another soggy country: South Wales.