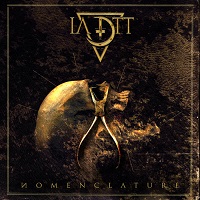 ‘Nomenclature’ is dark and gritty with a decent progression throughout each song. There is a clear evolution withing each track making every moment have a unique feel. IATT uses many unique elements that I did not expect, such as the use of soft piano in a few of the songs. While not something I expected, the soft piano made for a really nice ominous feeling that was really well done and set an interesting stage for the rest of the music. Some of the transitions from the typical blackened death metal to the softer melodic segments are somewhat abrupt but definitely in a good way. It really breaks up the album well, giving you a lot of variety to really sink your teeth into.

The vocals in some of the songs were a little interesting and might be an acquired taste for some. Don’t get me wrong most of the vocals are really spot on. There is a dark angry growl that is just perfect and there are screamed vocals that you simply can’t complain about.

However, in a few of the songs, there is a shouted low vocal in the background that for some reason just did not sit well with me. I want to say that it sounds like the voice you hear when selecting the fishing boat in ‘Civilization 5’ although it could be the first ‘Age of Empires’: the game is not important but once I heard it I could not un-hear it. It just generally seamed out of place and I don’t think that I will be the only one that finds it that way. However, it was not a vocal style that was used much on the album so even if it is not your thing the rest of the album still has wonderful heavy vocals that you will still like.

Most fans of black metal and death metal will find something they like here. It is unique and ominous. The piano is probably one of my favorite instruments in metal. It adds so much more depth and because it is not really a standard instrument of the genre it always feels like a treat. I also really enjoyed how most of the songs went in directions that I did not expect but yet most of the time still felt right. Any time music seems to take turns that are new and you don’t see coming it is always a good thing. I definitely would recommend this album.