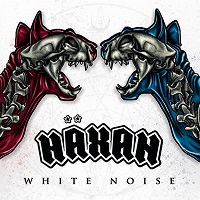 You can call them what you like – femmes fatales, metal maidens or (as I like to call them) outstanding musicians – the females of the metal world have consistently shown that they have the talent to outshine a significant majority of their male peers. Even so, the number of all-male bands significantly outweighs the all-female ones, which is a bit representative of the scene as a whole I guess. You only have to look at your average Uni Rock Society to see the significant imbalance… or was that just ours at Aston?

Anyway, that’s what we have with Häxan, whose latest album dropped in front of me unexpectedly this week. This Welsh trio have been making waves with their live performances across the scene, including Download Festival, Planet Rock Rockstock and even some international cruises among many more. With their energetic and seriously catchy grooves, it’s been no surprise that Häxan have been turning heads at every event that they’ve made an appearance to date! Presumably as a result of their successful support of Phil Campbell and the Bastard Suns, Häxan have teamed up with Todd Campbell to produce their anticipated debut album. ‘White Noise’ is the result of that partnership, but that is certainly not a description of what we’re in store for. Instead of something that you’re able to tune out pretty easily, ‘White Noise’ is the complete opposite in that it grabs you by the chin and repeatedly slaps you in the face to make you pay attention.

It’s a bit of trip through time in some respects, with tracks that take inspiration from subtly different areas and eras of rock, which leaves you with some songs that’ll take you back to the 1970s with the gutsy riffs and others that have a more modern feel to them. The one thing that does remain throughout the album is the sheer energy and the powerful voice of Sam that packs one hell of a punch. You could easily be forgiven for forgetting that this impressive sound is generated by just the three of them.

Straight out of the gate, this album pulls no punches with the mighty ‘Damned If You Do’ where the rhythm section makes their presence immediately known. The heavy hitting drum style of Jess alone is enough to create a minor tremor in the house and when combined with Harriet’s impressive bass playing, the whole starts a-shaking!

This is followed up by the impressive ‘Killing Time’ which has a distinctly Doro-vibe to it and could easily be an anthemic number as this band continues to go from strength to strength. It has that instantly catchy rhythm that’s bound to cause some sporadic headbanging and stick with you for quite a while. This track is a real earworm, so much so that I’m pretty sure the rest of my house knows this one off by heart already!

If that wasn’t enough big tracks to tickle your tastebuds, then try ‘Black Sheep’ on for size with its chugging rhythm and stupidly catchy chorus. If that doesn’t work for you, then what about the leading single ‘Skeletons’ which threatens to be slow and heavy before it accelerates at a pretty blistering speed into yet another seriously catchy number. It’s pretty safe to say that there’s an earworm for everyone on this album!

I’m sure I don’t need to mention that this is a particularly difficult time for the music industry as a whole, but nevertheless Sam and co. have decided that now is the right time to unleash this unto the world. I, for one, wholeheartedly agree with this! It’s never a bad time for an album of this quality and it would be a shame to not ride the momentum that Häxan have built through their live performances. It may not be possible for gigs to go ahead at the moment which does unfortunately rule out an album launch tour for the time being, this album is perfectly timed to build up some serious hype in preparation for what I would expect to be a pretty popular tour when conditions allow!