By Lyndon Delor and Bona Pjarren 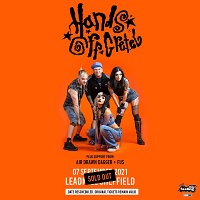 Arriving at Sheffield’s iconic, and sold out, Leadmill, you couldn’t help but notice the wide range of audience members that would be attending the Hands Off Gretel gig that night in the fast growing queue. The old and the young, the misfits and the outcasts, the passionate alternative music lovers and young bands such as Blood-Stained Reputation; all eagerly awaiting the doors as they shared the excitement of seeing the band that brought them together.

Myself and Bona missed the opening band FUS while interviewing Hands Off Gretel, but talking with the audience we were made aware of the opening band being a tough act to follow with their high energy and fun tracks, and they seem to be a band who know how to warm an audience up, leaving no one disappointed. (LD)

Introducing themselves as “a zany psych power trio”, FUS are based in an analogue studio, which neighbours various other independent DIY spaces, forging a creative community in beautiful downtown Sheffield. They also admit that they have crafted their sound from the ground up, restoring and modifying vintage amplifiers and guitars, having pedals custom built and modified, and are now beginning to build their own custom gear.

As I couldn’t experience them live, I did interview them (see below) and bought their self-titled EP (from which the track ‘Manjoe’ is available on Bandcamp) so here are my impressions of that… The overall sound is experimental with almost a doom element to some of it. Other parts are jazz bluesy. Imagine Frank Zappa started his career in the 21st century, he would have probably sounded like this. I love the typically English eccentricity and the evident sense of humour, particularly on ‘Spider Baby’. You can really tell from their sound that, true to their blog they have modified various pieces of equipment. In hindsight, I really regret missing this band but hopefully will catch them soon… Good job lads. (BP)

Next to follow were Air Drawn Dagger, who introduced the crowd to their holy experience, The Church Of Dagger. There aren’t many bands that can make songs feel so complete without a bassist in the band, but with the use of samples, keys, a well-orchestrated guitar and a heavy drum sound the alternative pop punk band filled the sound so no one could question if they would actually need a bass player… They don’t! Fronted by Maisie Manterfield, Air Drawn Dagger could easily be compared to the likes of Paramore, but no less captivating without the comparison. Air Drawn Dagger will be returning to Sheffield on 21 November, supporting Skarlett Riot at Corporation. (LD)

Here we are. The moment we’ve all been waiting for…

The stage lights are back up with the haunting ring of guitars ready to attack as Hands Off Gretel take to the stage; with the building sounds of drums getting more tense, the sold out crowd is ready. Lauren Tate takes her place front and centre; “Hello, Sheffield” she says in her broad Yorkshire accent and as the crowd scream with excitement the band explode with a classic track ‘In The Eyes’ with new and old fans singing along as if they’d rehearsed for this moment as much as the band themselves.

Not wasting a moment as the crowd scream and cheer we are taken into the band’s animal rights anthem ‘Milk’: whether you’re vegan or not, you can’t ignore the raw honesty in the song which will make you chant back the message in the music “not your mother, not your milk”. This led into yet another crowd favourite, ‘Alien’, and the crowd were aware that the theme was anthem to anthem as they prepared to sing and scream with the powerful Lauren. 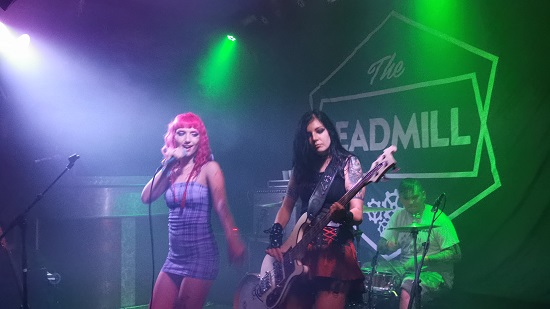 Of course, there are three other equally important members to this band: Becky Baldwin (also a member of the hard rock band Fury) on bass and backing vocals, who is one of the most sought after and talented bassists in the ÜK; Sean Bon on guitar, who can equally seduce an audience’s ears with beautiful and delicate playing as well as tear it up louder than Kurt Cobain; and Sam Hobbins on drums, a technical machine who keeps the band flowing. All of this to compliment Tate’s dynamic voice and arena worthy stage presence – bands like this do not come around that often, but they last because you cannot replicate them.

Following on from their endless feeling of rock party anthems and floor fillers, following ‘S.A.S.S’ a few songs in to the set list, the band bring it down as an entire room remembers why they relate to Lauren and her music. ‘It’s My Fault’ and ‘Freaks Like Us’ move audience members and leave them feeling as though they’re not alone in their struggles and that they can overcome their personal struggles. 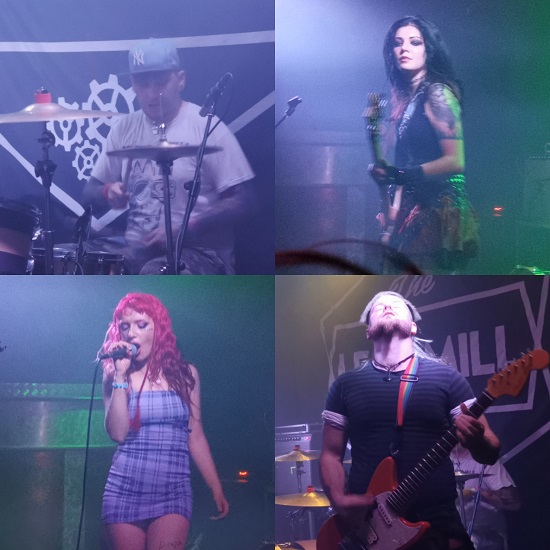 But now it’s time for ‘WAR’! Tate’s distinctive scream soars over the heavy riff and slick bass line as we are introduced to the new era of Hands Off Gretel which we all know is bound to be worth the wait. Of course, we heard the ‘Don’t Touch’ EP tracks, which hold up so well in a live environment, showing that Lauren Tate doesn’t just think she is, but truly embodies punk rock ‘n’ roll. The last track on the set list was the club rock dance anthem, ‘Kiss Me Girl’, a head banging and hip moving number which danced the band off stage as Bon’s guitar whirled out to the chants for one more song grew louder and louder…

The band took a deep breath as they took back to the stage to play their lockdown cover of Nirvana’s ‘Territorial Pissings’ with the same bombastic energy they had at the start of the power rock set. Sam, back behind the drums as he rips into the snare drum, Lauren and Becky explode back across the stage, stomping and jumping as if they were about to begin the show and Sean took to the side barrier for his own performance as he gave every last moment his all, even taking time to lick his strings in the middle of the song before the band blew up for the final chorus. With the final hit of the cymbals, an almighty scream, and Bon using the metal railing to roar the guitar, the lights came up and the band departed from the stage and the audience began to leave all knowing that for many of the dedicated fans they would soon see Hands Off Gretel again on their ‘Still Angry Tour’ happening across the ÜK now. (LD)