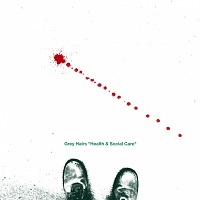 Imagine a bunch of unrecalcitrant middle-aged punks raging against the machine – only from the inside, venting their anger and fury at the failings of a system which they both seek to protect and yet see crumbling around them. That is the sound of Nottingham’s self-styled “political punks”, Grey Hairs, and it is expressed very firmly on this, their second album, and one which asserts the strength of a band now gelling as a cohesive entity, rather than a side project of its constituent members (they’ve all played in other bands on the east Midlands scene).

I can put the background to ‘Health & Social Care’ no better than the band themselves:

“This is not a bunch of guys mimicking their youth (or other people’s youth) and balancing their weekend anti-establishment anger with their job as a software developer, or vintage furniture dealer, or credit check specialist. If ‘Health & Social Care’ has a theme (and again the clue is in the title) it’s “how can someone be a public sector punk in 2019?”. Commendable though most political music is, it’s perhaps easier to articulate your rage at the system when you don’t spend over 40 hours a week working in it. But what if you do? What if your punk rock ethics extend to your occupation? This is a record about balancing your creative impulses with your life as you get older and the time to do either squeezes in on you. It’s a record about aesthetic punks, Dunning-Kruger syndrome in the Health service, extreme 360-degree cognitive dissonance and – most crucially – a confusion and inability to tackle these external problems because you’re so f*cked by your own personal ones.”

‘Health & Social Care’ is a furious album, in the truest sense of the word. It rages and boils, it seethes and spits, it sneers and it snarls, yet at the same time it smiles in the face of adversity, raising a defiant middle finger to those responsible for the failing system which lies at the heart of its unrestrained anger and angst. It is morose in its joyfulness, ecstatic in its regret, captivating in its unbridled energy and ironic in its chaotic cohesion.

If you’re looking for a direct musical comparator, IDLES would be a good reference point, as the two bands share a lot of common denominators in their brand of modern-day punk. They both possess a rage with is tangible yet controlled. They both possess that sense of desperation and helplessness at a system which has failed but they are unable to see a way of fixing – even, in the case of Grey Hairs, from the inside.

Despite its raw energy and fury, ‘Health & Social Care’ is a carefully considered album, a defiant statement of intent from a band refining both their identity and their sound, a band of brothers (and one sister) determined not to go quietly into that dark night but to do raging and screaming with their own particular brand of protest song. It is an album that carries the torch for modern punk and deserves your full and undivided attention, forthwith… Oh, and while you’re at, send a copy to BoJo, while you?