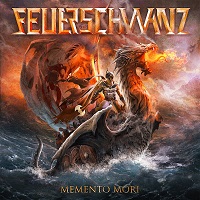 Sonically treading a path somewhere between the battle metal of Sabaton and the uplifting folk metal of the likes of Ensiferum, Feuerschwanz touch base with all the tropes of both subgenres and the main PM mien. Searing guitar solos dart in and out between whirling dervishes of flute, hurdy-gurdy and violin; massive melodies soar and glide with cinematic scope; huge choral choruses counterpoint crunching, punchy riffs; all underpinned by driving, precise rhythms which add to the sense of power and energy prevalent throughout.

Similarly, the lyrical tropes are also all omnipresent: Vikings sailing into the unknown in search of plunder (‘Untot im Drachenboot’), a warrior mourning his fallen father (‘Das Herz Eines Drachen’), a hero taking on almost insurmountable in a seemingly doomed quest for revenge (‘Hannibal’). Hell, given the timing of the album’s release, they even manage to throw in a “Christmas song”, as they retell the legend of ‘Krampus’ in a way which deserves to be sung from every cathedral in the Überverse.

For the second album in a row, ‘Memento Mori’ comes with a bonus CD of cover versions, interpreted in the band’s own inimitable style. Last time around, with ‘Die Sieben Todsünden’, they treated us to renditions of tracks by Ed Sheeran and German dance act Seeed. This time around, ‘Die Glorreichen Sieben’ sees them tackling the likes of Swedish melodeath giants Amon Amarth, Moldovan Eurodance act O-Zone, Canadian producer/singer The Weeknd (who seems to have been a popular choice for metal covers this past year) – oh, and Manowar! The deluxe edition also comes with a CD containing instrumental versions of the main album tracks… but TBH that’s probably of interest to diehard fans only!

If you like your power metal gloriously bombastic, gloriously OTT, gloriously pompous – and gloriously cheesy – then ‘Memento Mori’ definitely ticks all the boxes and should be top of your shopping list for spending all those lovely vouchers you’ve just received from various family members this past weekend.