Showing that they are determined to help the live music scene explode into the post-lockdown era with a vengeance, Slam Dunk have announced a raft of top-notch new additions to their September bills.

Folk-punk troubadours Frank Carter And The Sleeping Souls lead the charge of newly-confirmed acts, with the list of latest additions also featuring Alkaline Trio, Funeral For A Friend, Hellogoodbye, Capdown, Loathe and As It Is.

This septet join a line-up headlined by Sum 41 and Don Broco and a bill that also features the likes of NOFX, While She Sleeps, Mayday Parade, We Are The In Crowd, Four Year Strong, A, Static Dress, Wargasm and many more.

“We’ll be celebrating Slam Dunk Festival’s 15th Anniversary in September and I’m so happy these newly announced artists will be joining us! Although the re-opening date has moved to July, we are even more confident that the festival will go ahead this year, thanks to the positive news from the test events and the rapid vaccination programme taking place.  With the overwhelming support shown by our fans who have kept a hold of their tickets and those who have bought tickets recently too, we know how important it is that we do our best to deliver a brilliant show this September.”

Slam Dunk North takes place at Temple Newsam in Leeds on Saturday 4 September and Slam Dunk South takes place at Hatfield Park in Hatfield the following day (Sunday 5 September). All bands will appear on both days. Tickets, in all their various options, are available HERE. 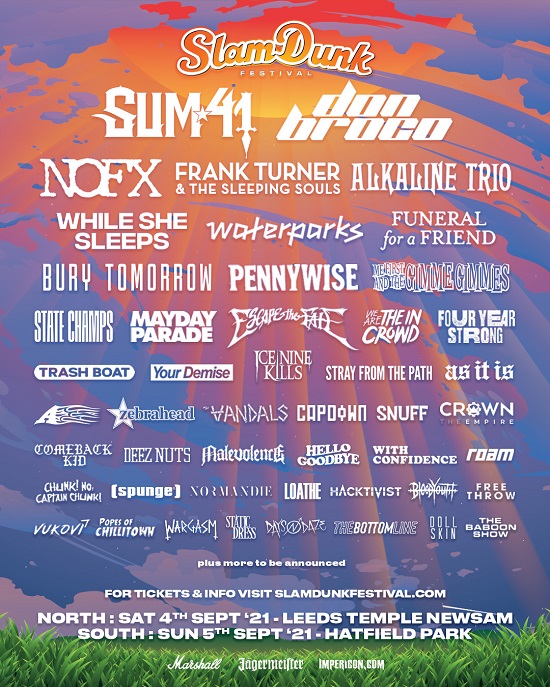