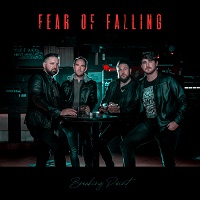 In a recent review I did, I went on a rant about how much this genre means to me. I will spare you that full rant here for the cliff notes version. This is a genre that has so much competition and some outstanding greats like Seether, Breaking Benjamin and Five Finger Death Punch, among others. You have to really make yourself stand out to make it in my mind. So how does Fear Of Falling do to breakthrough?

Musically, everything is as you would expect. Nice heavy guitar tones with a good rhythm and impactful drums driving the emotion. There is not a huge variety throughout the tracks themselves in the tone but what is there is well done. There are some well-done softer lead-ins to those tracks which adds some variety but otherwise, it does get a little repetitive at times, which is unfortunate.

Vocally, I have similar comments. The tone is great. There is that deep powerful style with a bit of breakup when pushed. Totally fits in for the genre. I have no complaint about the actual vocal style, but I do lose interest in the lyrics. It is not because of the topics or anything. Things are just way too repetitive for my taste. I don’t feel like the band is really taking me anywhere, so the songs just fade into the background for me not really making much impact.

There is so much potential here. The band is talented, the tone kicks ass and the vocals are impactful. I would just get bored toward the end of the tracks due to repetition. I feel that with a bit more variety Fear of falling could be one of the greats. For example, track six, ‘Won’t Let Go’, has none of those problems. It keeps your attention and evolves over the track. There is a nice variety in the movements. The lyrics feel like they are taking me somewhere. There is desperation and hope conveyed in the portrayed emotion. If the whole EP were like this track, I would be calling it a must-buy. I can’t wait to hear more from the band in the future because I feel like it is a great start but as it stands now it would fit in well in a playlist but not as the start. Check out track six, though, it just might be good enough to carry the whole EP.