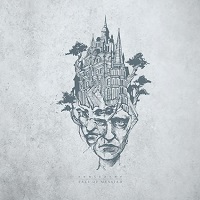 Old flesh. Rooted. These are two meanings evoked by the title of the newest output from French post-rockers, Fall Of Messiah.  ‘Senicarne’ is an album born out of underlying connections between man and his notions of nature and reality, and the tempestuous relationships that lie therein.

With this being a primarily instrumental record, the music itself does all of the heavy lifting in order to convey these concepts.  In truth, it’s arguable whether a listener would ever naturally envisage quite what the band had in mind at the time of composition without some explication – however, that can be said of any album that demands a more immersive response from the participant.  And there is plenty to engage with on ‘Senicarne’ if you allow yourself to marinate in its soundscapes, which do go some way as to reflect these loftier notions.

‘La République Du Vide’ is an instantly charged opener with its barrelling rhythms and cumulative layers of effective guitars; raindrop like arpeggios gradually swell from leaf-thin delicacy into a thunderous crescendo that could pass for Mastadon circa ‘Blood Mountain’.  It’s a trick Fall Of Messiah pull off a number of times on ‘Senicarne’, each display as cathartic as the last, the peak arriving in the sheer bombast of ‘Riverloup’.

The band weaves in some math rock in the jerking backbeats of ‘Contreforts’.  The track’s midsection evokes mid-noughties post-hardcore and features stark juxtaposition between it’s almost impossibly shiny clean guitar tones that bleed into acerbic chordings. The more immediately subdued ‘Vertes Vignes’ is comparable to latter day La Dispute in it’s languid atmospherics, while the more technically proficient and aggressively charged ‘Young Pines’ is akin to Touché Amoré; a track absolutely bristling with pace as it ebbs and flows thanks to its nuanced dynamics.

‘Sequoia’ is by some distance the standout moment where Fall Of Messiah demonstrate the extent of their musical dexterity, as it moves from a borderline black metal tremolo riffing style into a protracted shoegaze section and then allowing both extremities to meet in the middle.  Picture Deafheaven getting really into Explosions In The Sky, and the results are as glorious as it sounds.

If a criticism can be levelled at ‘Senicarne’, the fleeting moments of harsh vocals peppered throughout the album don’t do an awful lot to either add further colour to its overall sound, or to the overall conceptualization.  However, the economy of the songwriting, alongside the dynamism of the musicianship, provide more than enough reason to give this a try.